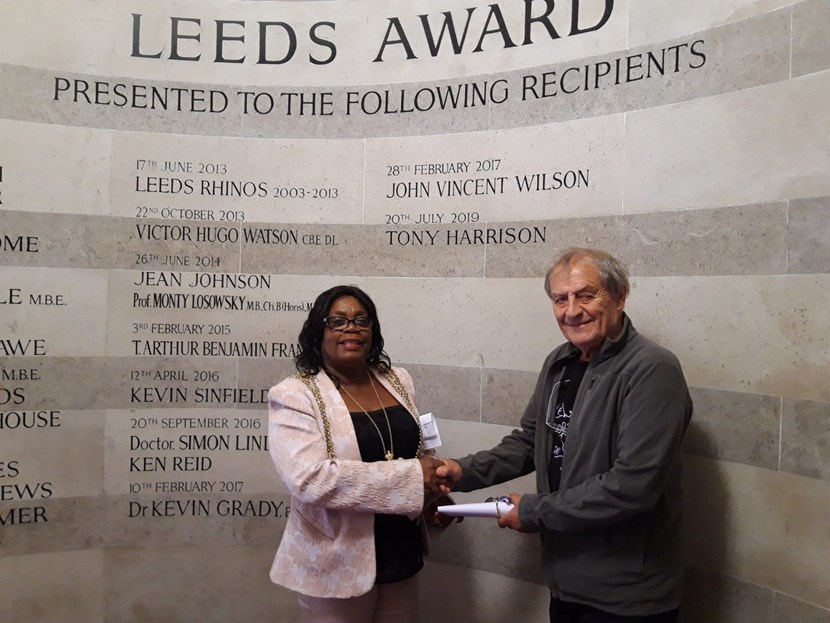 Distinguished Leeds-born poet and playwright Tony Harrison, has received one of the city’s highest civic honours.

On hand to present Tony with a ‘Leeds Award’ in recognition of his nationally and internationally acclaimed work was the Lord Mayor of Leeds, Cllr Eileen Taylor as part of a special ceremony held at the city’s civic hall. In appreciation of his immense cultural contribution, Tony’s name will now be displayed with pride alongside the small number of people to receive a prestigious Leeds Award in the ante chamber of the civic hall.

Born in Beeston, in 1937, Tony has enjoyed a stellar career over seven decades following his study of the Classics and Linguistics from 1955-1960 at the University of Leeds. His wide-ranging volumes of poetry include The Loiners, Continuous, V, The Gaze of the Gorgon and Laureate’s Block, amongst many others. One of Tony’s best-known works is the long poem ‘V’ published in 1985, which described a trip to see his parents’ grave in the Holbeck area of the city.

A fellow of the Royal Society of Literature since 1984, Tony has written extensively for the National Theatre, The New York Metropolitan Opera, the BBC, Channel 4, and the RSC. In recognition of his unique talent, Tony has received and also won a host of awards. These include receiving the Faber Memorial Award, the European Poetry Translation Prize, a UNESCO fellowship, and winning the inaugural PEN/Pinter prize in 2009, the European Prize for Literature in 2010, the David Cohen prize for Poetry in 2015 and the Premio Feronia 2016 in Rome.

His incredibly rich archive collection, including over 250 notebooks documenting every aspect of his creative works to this present day, now sits proudly at the University of Leeds after being acquired in 2007.

A measure of Tony’s standing and contribution is underlined by those that nominated him for a Leeds Award from the city’s thriving writing community. Amongst the many to provide a glowing testimonial included playwright, screen writer and author Alan Bennett and Simon Armitage, former Oxford Professor of Poetry and current Poet Laureate. In his testimonial, Alan described Tony as ‘far and away the most distinguished poet whom the city has ever produced’, whilst Simon cited his achievement as ‘staggering-elevating the native language of his birth and the City of Leeds to the status of literature’.

The full citation of Tony’s Leeds Award, 'honours his distinguished career as a poet and playwright who put the city of Leeds firmly at the centre of his work, promoting it on both a national and international stage'.

“It was an absolute honour and privilege for me to be able to present Tony who is undoubtedly one of our city’s greatest playwrights and poets, with a Leeds Award.

“Tony’s collection of works over seven decades are both unique and outstanding, and as the citation on his award states, has certainly played a significant part in putting our great city on a national and international stage, especially in arts and culture. The Leeds Award which is one of our city’s most prestigious civic honours, was designed to honour those people that have made an enormous contribution and achieved so much in their respective fields, and there is no better recipient than Tony.”

“The city of Leeds has, and always will, play a hugely significant part in guiding and informing my work. It is therefore a huge honour and a very proud moment for me as someone who was born in Beeston and grew up in the city, to be recognised by this Leeds Award.” 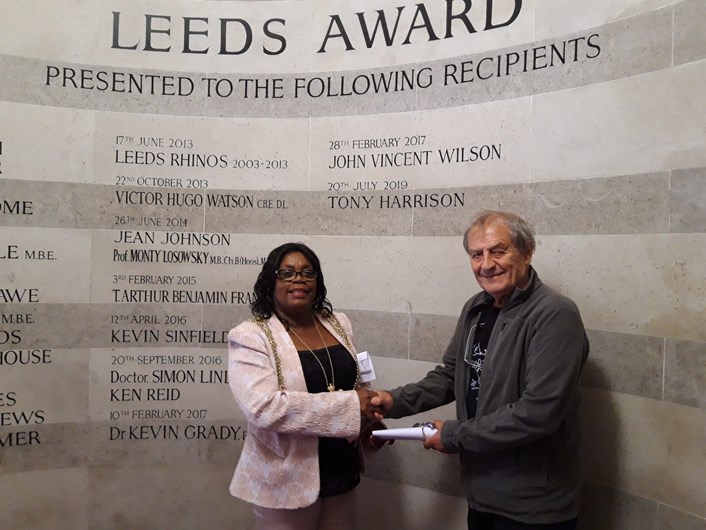