A fascinating collection of skeletons capturing more than 2,000 years of human history will go on display today in ground-breaking new exhibition in Leeds.

Skeletons: Our Buried Bones brings together 12 skeletons from Yorkshire and London, some of which have never been seen by the public before and each offering a unique insight into the health and heritage of people living in different eras.

The exhibition has seen curators painstakingly reassemble each skeleton, displaying them anatomically and side by side in the museum’s special exhibitions gallery.

All the skeletons going on display have been analysed by specialist osteoarchaeologists from the Museum of London, revealing more about their stories as well as health conditions and injuries they suffered and how they may have died.

Among the remains which feature in the exhibition are a soldier discovered in a mass grave near the site of the Battle of Towton, a brutal conflict during the Wars of the Roses in 1461.

He sustained severe injuries which show he suffered an extremely violent death and he may have been executed after the battle.

Also part of the exhibition will be the remains of a Medieval anchoress from the Church of All Saints in Fishergate, York and a Medieval man who survived being shot in the back by an arrow or crossbow, only to be killed later by the Black Death.

His remains were excavated from East Smithfield, the first dedicated Black Death cemetery in London.

Katherine Baxter, Leeds Museums and Galleries’ curator of archaeology, said: “From a historic and scientific perspective, what this exhibition allows us to do is to build a very vivid picture of how each of these people lived, some of the illnesses and injuries they suffered and how they died.

“But by learning more about these individuals and their lives, we’re also able to engage with their stories on a human level and forge a very real and very powerful connection to our past.

“Each of these skeletons is representative not only of a distinct chapter in our heritage, but of a person who played their own unique role in shaping the world we know today and who then became part of the fascinating history beneath our feet.”

Other skeletons on display include the ancient remains of mystery Iron Age man and woman found buried together during archaeological excavations beside the A1 near Bramham between 2007 and 2008.

They were buried together in what experts call a double crouched burial, with both bodies were drawn up into the foetal position and placed alongside each other.

Also on display is a soldier from Oliver Cromwell's army, thought to have died in York as the result of a mass outbreak of infectious disease.

Councillor Brian Selby, Leeds City Council’s lead member for museums and galleries, said: “The subject of this exhibition is both fascinating and poignant and I’m sure it will prove a thought-provoking experience for visitors.

An accompanying event programme is advertised now on Eventbrite.

About the Museum of LondonThe Museum of London tells the ever-changing story of this great world city and its people, from 450,000 BC to the present day. Our galleries, exhibitions, displays and activities seek to inspire a passion for London and provide a sense of the vibrancy that makes the city such a unique place. Our museums are open daily 10am – 6pm and are FREE to all, and you can explore the Museum of London with collections online – home to 90,000 objects with more being added. www.museumoflondon.org.uk

Two individuals found buried together in a double crouched burial. The female has large benign tumour on her skull, and dental problems with evidence of tooth decay, abscesses and gum disease. The male has a range of pathologies including evidence of healed disease. We don’t know why these individuals were buried together, what the relationship was between them, or how they died.

This individual was buried prone (face-down), which is unusual, in a shallow grave cut into the bedrock. The skeleton shows evidence of various dental problems, and a healed childhood fracture.

The skeleton of a soldier who was killed at the Battle of Towton in 1461, and found in a mass grave. The individuals in the grave had sustained multiple peri-mortem (around the time of death) injuries from a variety of weapons.

On loan from The University of Bradford

This female was probably an anchoress (the female version of an anchorite), possibly Lady Isabel German who lived in a cell in the church between 1428 and 1448. Her skeleton shows she suffered from severe osteoporosis and advanced venereal syphilis.

This individual from Oliver Cromwell's army is likely to have died along with others as the result of a mass outbreak of infectious disease. From April to July 1644 York was under siege by Oliver Cromwell and his Parliamentary army. It was Cromwell’s forces outside the city walls that would have suffered most, indicated by the mass graves at Fishergate.

This individual had fractures to the right upper and lower leg caused by a high-impact fall or collision. The bone has healed but the leg is shorter and no longer straight.

The skeleton shows evidence of multiple fractures, sinusitis and osteoarthritis in knees, elbow, vert and clavicles.

This skeleton has a projectile injury in the spine. He was shot in the back by an arrow or crossbow, but survived this injury as there is evidence of healing. He was killed by the Black Death, but we only know this because he was buried in the Black Death cemetery at East Smithfield.

The skeleton has developed green staining due to contamination from copper waste from the Royal Mint.

This individual suffered from prostate cancer which spread to his bones, causing multiple fractures. 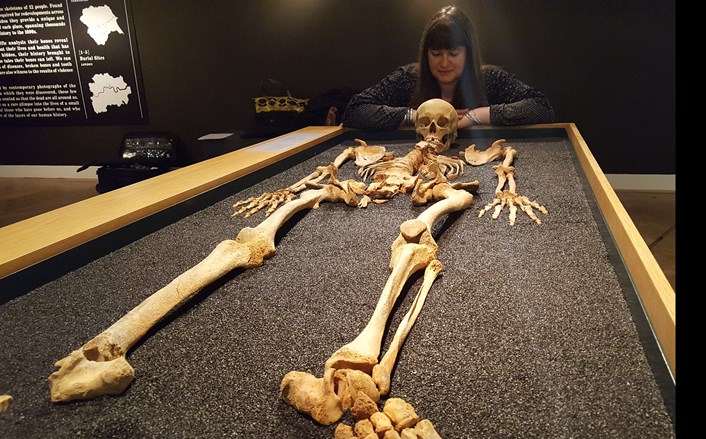