Call to action on bin yards

Leeds City Council is calling on residents, landlords and tenants to work with the authority to clear up bin yards.

Although the majority of the city’s bin yards are owned privately by those living in neighbouring properties, there is an expectation that the council will repeatedly clear up those that become dumping grounds.

With local residents and businesses in some areas becoming increasingly concerned about the impact on their community and reputation, the council is hoping to work with people so they can tackle persistently problematic bin yards themselves.

A current case being dealt with by environmental action officers in Armley demonstrates that this isn’t always as straightforward as it sounds.

With 16 different people responsible for the upkeep of the private bin yard, environmental action officers have been trying to encourage people to take positive action. Skips have been provided to help people clear out the accumulated mess.

With a mixed response from the numerous residents, landlords and tenants involved, environmental action officers have done their utmost to make sure they understand their responsibilities.

In some cases, legal notices have had to be served to enforce action.

Complicating matters further, the bin yard, as with many across the city, is an easy target for flytippers.

Environmental action officers have been actively seeking local residents who will provide official witness statements so the flytippers can be traced and prosecuted.

The council has cleared the bin yard before it becomes a health and safety hazard on numerous occasions.

This case highlights the amount of time, effort and resource the council puts into helping people understand and act on their responsibilities.

“We want to have a constructive discussion with residents, tenants and landlords about what we as a council can do to help them fulfil their responsibilities in helping to keep streets and communities clean.

“Our resources aren’t infinite and we can’t continually clear up after others especially when they have a role to play.

“Equally, we can’t stand by and allow flytipping but we need people to come forward with information so we can catch the perpetrators.

“By having this type of dialogue with residents, we want to facilitate change than can be sustained in the long-term and have a positive impact on the local environment. Legal action is available to us but we’d much rather work with people.” 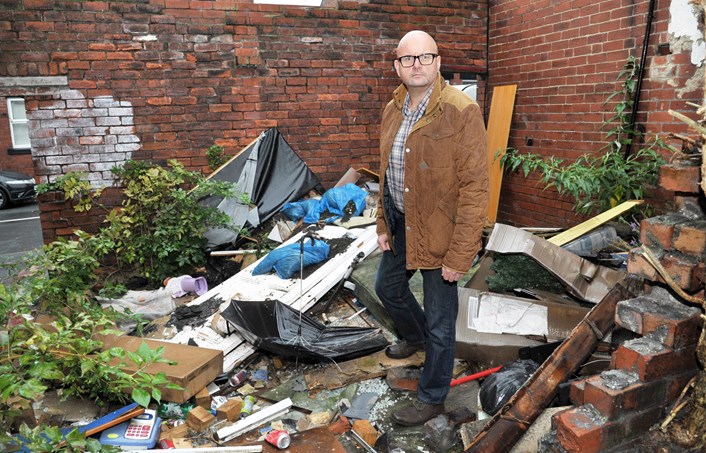