A huge abstract mural will be unveiled at Leeds’s historic Kirkgate Market during an exciting performance to mark this week’s incredible Light Night 2016.

Internationally-renowned Leeds artist Nicolas Dixon has been working on his latest eye-catching creation in the 140-year-old building’s newly-refurbished events space, with the finished piece set to go on show this Friday, October 7.

Entitled Change is Upon Us, the massive hand-painted mural features an owl and 29 stars, signifying the different districts of Leeds, and will be a key part of a dynamic display that will bring together a unique combination of art, improvised music, dance and animation.

Special LED lights will bring the mural itself to life, while a time lapse video will show exactly how the colourful artwork has progressed over the past three weeks.

Nicolas, who studied at Leeds College of Music, said: “I’m Leeds born and bred so I’m so excited to be involved with a project in such an iconic building as Kirkgate Market.

“It’s my biggest mural to date and has a lot of my own personality and style in it. Even though I’ve had exhibitions all over Europe and in New York, this will definitely be my proudest moment and I hope people will enjoy it for many years to come.

“I came to Light Night last year not really knowing what to expect and I was just blown away by it. It’s amazing to be involved in it this year and I hope we can help make it just as good if not better.”

Friday’s Light Night performance at the market will take place from 6.30pm until 11pm on what will be the second part of this year’s two-night festival.

Celebrating its 12th year, Light Night is organised by Leeds City Council in association with the LeedsBID (Business Improvement District) and supported by Arts Council England.

This year, Light Night is themed around the four basic elements of earth, air, fire and water, with more than 50 innovative events and installations spread across the city on October 6-7, the first time the event has ever been held over two nights.

Thursday night will feature a family-friendly programme, including the city’s first ever light triathlon and lantern parade, with the incredible Phoenix in the Stone projection also lighting up Leeds Civic Hall on both the Thursday and Friday.

Friday’s expanded programme will see local and international artists transforming locations around the city, including The Falls, a 100ft digital waterfall on the Queens Hotel, and Today, a ground-breaking music and light project in the Trinity Leeds shopping centre.

Councillor Judith Blake, leader of Leeds City Council, said: “Year after year, Light Night continues to raise the bar, making arts and culture engaging, accessible and fun for people of all ages, creating some unforgettable images and memories which last throughout the year.

“This year more than ever, as our bid to be European Capital of Culture 2023 gathers pace, we want Light Night to really lay down a marker for what culture means in Leeds, showcasing just how passionate and excited we are to be a city where innovation, art and creativity can shine so brightly.

“It’s also wonderful to see this historic building, which means so much to Leeds, playing such an important part in the event.”

Andrew Cooper, Chief Executive of LeedsBID, added: “Light Night is a shining star in the city’s cultural calendar and illuminates Leeds in spectacular fashion. It was one of the first events LeedsBID became involved with and we are delighted to continue to financially support this event and to assist practically, extending its audience, appeal and people’s overall enjoyment.”

The Phoenix in the Stone

Put together by Illuminos, The Phoenix in the Stone, will see the gigantic mythical bird represent the coming together of four elemental forces, symbolising the different parts of Yorkshire working together, with Leeds at their heart.

The Falls, created by Dave Lynch, explores of the flow and form of water with an incredible 100ft digital waterfall projected onto the historic Leeds hotel.

With a musical score inspired by the forces of nature, the installation aims to explore both eh abstract and reality.

A mesmerising creation by Squid Soup, this huge, 3D installation, is made up of 6,000 lights that pulsate and change colour as it floats in the middle of Leeds Dock.

Set to a water inspired soundscape, the lights are designed to give the impression of movement.

The flowers are sensitive to light, fluidity and movement, allowing visitors to walk through them and connect with their environment.

An ambitious trio of installations that will come together on October 6.

The unique event will include a stunning water-themed lantern parade, which people from across Leeds can take part in by crafting their own lanterns at workshops.

The parade, which will start on Briggate at 7.30pm, will also include street theatre and stilt walkers and will be put together by Hebden Bridge-based Handmade Parade, who have worked on similar spectacles around the UK. 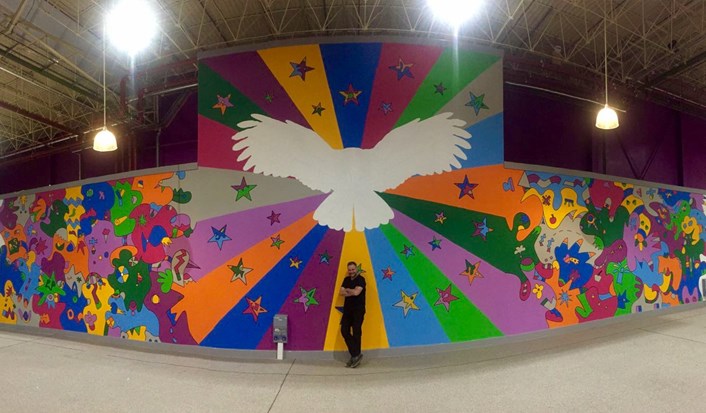