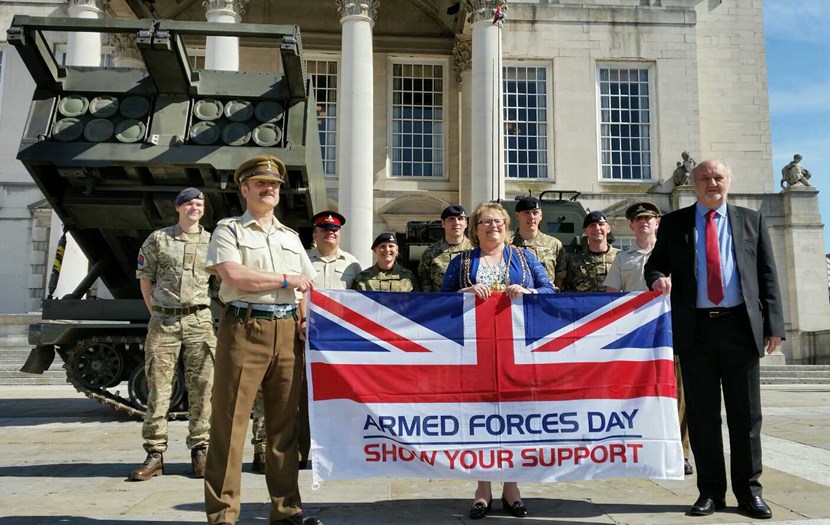 The official Armed Forces Day flag has now been raised in the city, as Leeds starts the countdown to a special day this Saturday celebrating the dedication and commitment of those serving in the British Armed Forces.

As part of a special ceremony held on Victoria Gardens, the Lord Mayor of Leeds Cllr Judith Chapman was given the honour of raising the Armed Forces flag, which is now also flying proudly over landmark civic buildings in the city, Leeds Town Hall and Leeds Civic Hall in preparation for Armed Forces Day, which will be celebrated across the UK on Saturday June 27 2015.

A range of events, activities and entertainment are set to be held in Leeds on the day as part of a free event hosted by the Lord Mayor in the city centre on Victoria Gardens, Cookridge Street and the front of Leeds Town Hall from 11am-4pm.

Kicking-off the programme at 11am is the Lord Mayor on Millennium Square, who will be officially opening the event with the City of Leeds Pipe Band. This will be followed by two parades, which will include The 4th Battalion The Yorkshire Regiment exercising their right to parade through the city. Following an inspection by the Lord Mayor in Millennium Square at 12noon, the Freedom of the City parade will then set off at 12:15pm and make its way through the city centre before coming back to Victoria Gardens. Another parade, including military personnel, veterans and cadets, led by the 148 (Barnsley) Sqn ATC Band will set off soon afterwards from Millennium Square and loop past Victoria Gardens.

Following the end of the parades, Victoria Gardens will then become the focus of the celebrations as a variety of entertainment in a 1940s Majorettes wartime show and local band Alligator Gumbo will take to a specially constructed stage to delight the crowds. Also on offer for children and young people will be a crafts tent, a climbing wall and a night vision experience; a 24 tonnes Multiple Launch Rocket System and other military vehicles. These will sit a range of charity and military linked stalls which visitors will be able to browse. A special Drum Head service will also be held at 3pm, and weather permitting, the day’s festivities will be rounded off at approximately 15.30pm by an amazing Spitfire flyover over Victoria Gardens and the city centre.

Leeds has a proud historic link with the British Armed Forces, and in 2012 the council signed the Armed Forces Community Covenant. This covenant ensures that a variety of support, help and guidance is available to in-service personnel, veterans and their families. In 2015, Leeds City Council also signed up to support a project by the Armed Forces charity RBLI (Royal British Legion Industries) on an initiative called RBLI LifeWorks courses to reduce levels of unemployment among ex-service personnel living in the region.

To keep up to date on Armed Forces Day, please see: http://www.leeds.gov.uk/Events/Pages/armed-forces-day-2015.aspx

“It was a real privilege and honour for me to be given the opportunity to raise the Armed Forces Day flag in Victoria Gardens as we look forward to what I am sure will be another fantastic day on Saturday as Leeds’ comes together to thank members of the Armed Forces and our veterans for their tremendous service.

“The programme for Saturday is really fantastic and has something that all the family can enjoy. The amount of time and effort which has been put in by so many people to make this Armed Forces Day event a reality cannot be underestimated, and a big thank you to everyone who has played their part in the organisation.”

“We are immensely proud of our city’s historic and rich links with our Armed Forces, and we are delighted therefore as a council to be playing a full part in Armed Forces Day which is an event that the people of Leeds have really taken to their hearts.

“There will be an opportunity for the public to watch two parades by serving military personnel throughout the city centre, and afterwards enjoy a variety of entertainment, activities, stalls and events on Victoria Gardens. The event will be capped off by an amazing Spitfire flyover, as we look forward to welcoming in what I am sure will be another great crowd on the day.” 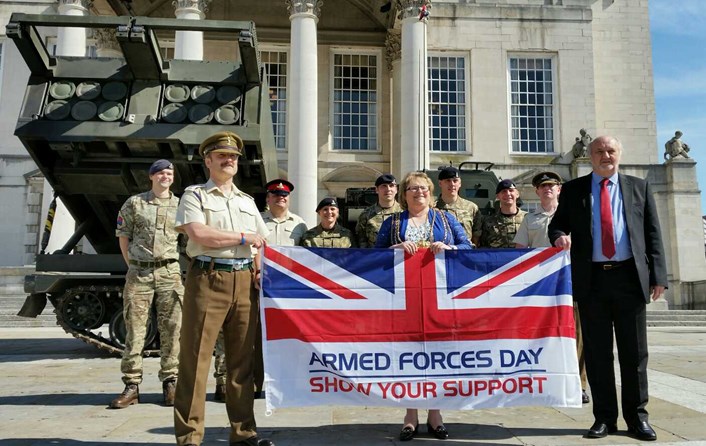