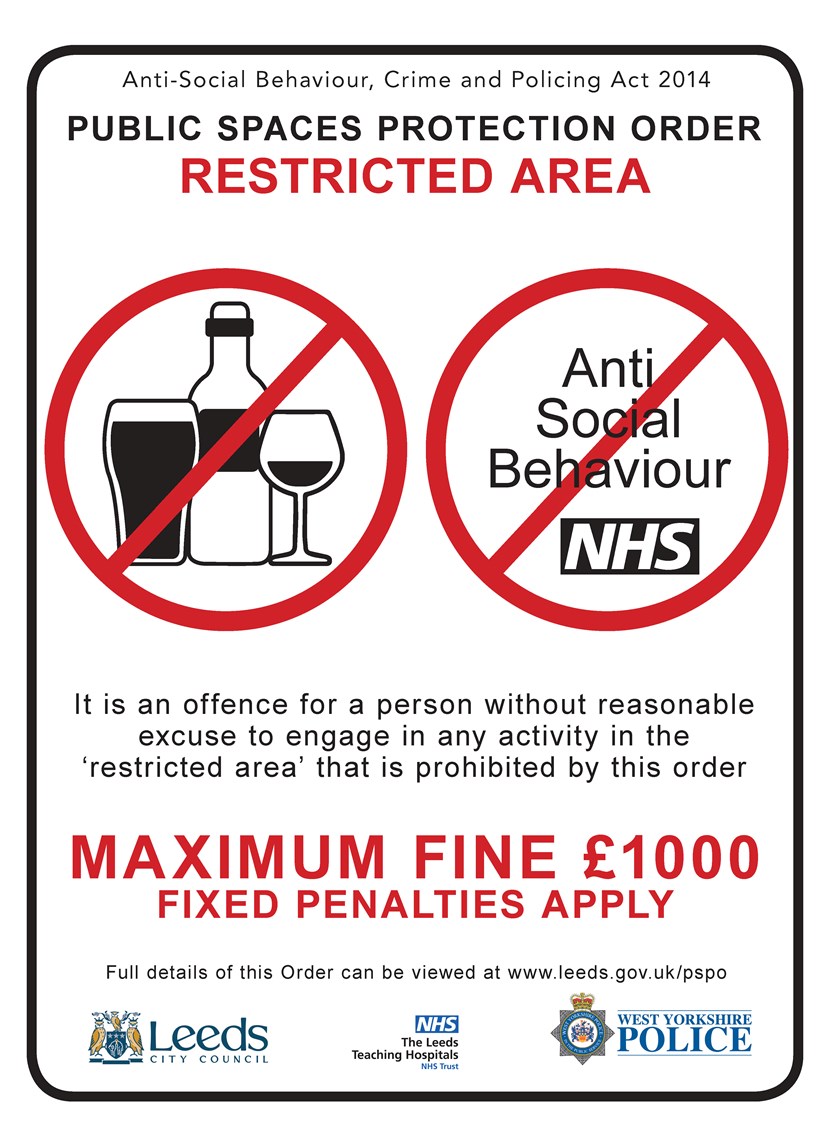 Additional powers introduced in October 2017 to tackle anti-social behaviour and associated issues in designated communities across Leeds will remain in place following a review.

Also given the go-head by Leeds City Council alongside the existing 13 Public Spaces Protection Orders (PSPOs) is a new PSPO specifically covering the area of Swillington. A PSPO can last for up to three years under the Anti-Social Behaviour, Crime & Policing Act 2014, and can be extended upon review.

All 14 PSPOs have prohibitions which do not allow people to consume alcohol in public places. Prohibitions to help tackle issues of household waste containers being left in the street for prolonged periods of time will also remain in two PSPOs covering Armley and Harehills.

Following the review, also given the go-ahead are prohibitions around ‘temporary structures’ (tents, portable shelters and unauthorised and unlicensed structures) to the City Centre PSPO. The City Centre and Burmantofts PSPOs also have prohibitions to support the tackling of anti-social behaviour issues seen at Leeds General Infirmary, and St James’s University Hospital.

The introduction of the PSPOs will continue to support the authority and partners in their work across each of these communities, and in terms of those areas covered previously, continue to build on the previous positive results seen over the past three years.

Continued failure to comply with any requirements contained under the PSPOs could result in enforcement action being taken, which could include a fine or action through the courts.

As part of a public consultation regarding the potential introduction of these PSPOs, the council engaged with a wide range of stakeholders including West Yorkshire Police and the Police and Crime Commissioner, local councillors, community and resident associations, Leeds Teaching Hospitals Trust, and Leeds Chamber of Commerce and local businesses. A public consultation also generated 1,259 responses.

To find out more about PSPOs in the city, please see: www.leeds.gov.uk/pspo

“PSPOs have proved to be an extremely useful tool in helping us and partners tackle anti-social behaviour and associated issues in designated communities across Leeds over the past three years in a positive and proactive way.

“I am pleased therefore that following a review which must be undertaken by law and through a public consultation, the previous 13 PSPOs which were in place, will continue, with some alterations in individual areas to tackle specific issues. Having listened closely to the views of residents and stakeholders, an additional PSPO will also be introduced to cover Swillington, and forms part of our commitment to take whatever steps are needed to ensure our communities continue to remain safe, and that action is taken against those involved in any form of anti-social behaviour.”

Public Spaces Protection Orders (PSPOs) propose to deal with a particular nuisance in a particular area that is having a detrimental effect on the quality of life for those in the local community. It can prohibit certain things or require specific things to be done.