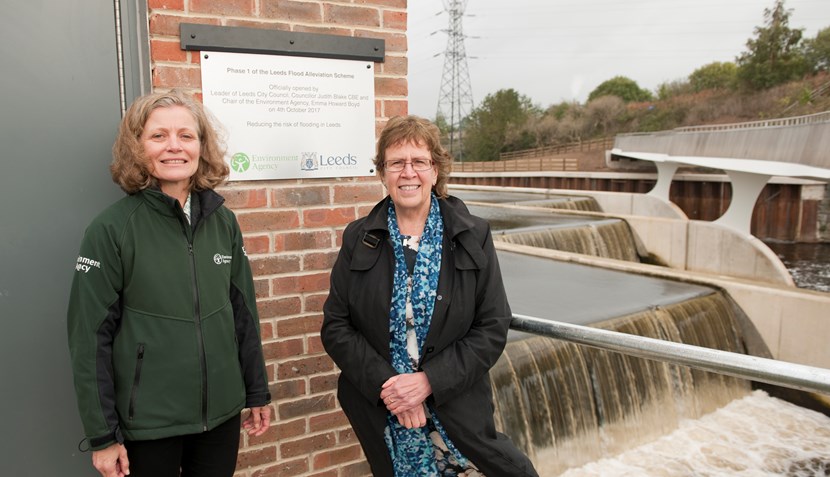 A £50million flood alleviation scheme in Leeds which uses moveable weir technology – a first for flood risk reduction in the UK – has opened today (4 October 2017).

The first phase of the award-winning Leeds Flood Alleviation Scheme not only uses state-of-the-art flood defence engineering techniques but is one of the largest river flood alleviation schemes in the country.

Led by Leeds City Council in partnership with the Environment Agency, the scheme will provide more than 3,000 homes, 500 businesses and 300 acres of development land with increased protection against flooding from the River Aire and Hol Beck.

More than 22,000 jobs will be safeguarded over the next 10 years due to the increased level of protection and through the scheme’s development and construction, 150 jobs and apprenticeships have been created.

It comprises three main elements: state-of-the-art mechanical weirs, the merging of the river and canal and flood walls and embankments stretching 4.5km through the city centre.

The scheme, which sees work on the River Aire now substantially complete and work at Holbeck continuing into autumn, is being officially opened by the Leader of the Council, Councillor Judith Blake CBE and Chair of the Environment Agency, Emma Howard Boyd.

“We are delighted to see this much-needed first phase of the Leeds Flood Alleviation Scheme opened. As could be seen by the devastation at Christmas 2015, providing increased flood protection in Leeds is essential in terms of reassuring our residents and businesses, and this fantastic state-of-the-art scheme provides it for the city centre and downstream at Woodlesford. The clever use of the mechanical weirs is a brilliant idea, and they have also brought about environmental benefits with the improved river quality bringing salmon and otters, while the new bridge looks stunning offering great views of the river and beyond as part of the Trans Pennine Trail.

“We’d like to thank everyone involved in this phase of the scheme and look forward to developing the plans for phase two and beyond, as only through an entire catchment and citywide approach can we protect all communities in Leeds from the threat of flooding.”

“This ground-breaking scheme will not only benefit hundreds of homes and businesses in the city but it will also safeguard 22,000 jobs over the next 10 years due to the increased level of protection it provides. It’s been great to see Leeds City Council and the Environment Agency working together in partnership to better protect the city – and it is one of many schemes in the Defra programme investing £430 million to reduce flood risk across Yorkshire before 2021.

“We’re always looking for new ways that we can use technology to reduce flood risk so it’s exciting that this scheme is also a first for flood risk management in the UK thanks to the use of the moveable weirs which can be lowered when river levels are high. On a day-to-day basis, people won’t even know they are being protected, and they can enjoy the river which is a key aspect of the city’s South Bank regeneration plans.”

"No-one can forget the devastating flooding residents and businesses in Leeds faced nearly two years ago. We know how distressing flooding is for all those affected and I’m delighted that through this new state-of-the art £50 million scheme thousands more people living and working in Leeds will be better protected.

“Our commitment to strengthening flood defences across Yorkshire doesn’t stop here – we are investing £430 million over six years up until 2021 to better protect the region using the best technology and engineering available.”

It is the first time that moveable weirs have been used in the UK for flood alleviation purposes. The new weir gates are supported by giant inflatable neoprene bladders that can be lowered when high river flows are expected. It takes around two hours for the gates to lower, and thanks to the installation of these weir gates, it has been possible to keep flood defence wall heights to a minimum so as not to spoil views of the city centre waterfront.

The weirs have been installed at Crown Point in the city centre and further downstream at Knostrop, where a new locally manufactured bridge has been installed across the weir connecting the diverted Trans Pennine Trail with the north bank of the river.

Weighing approximately 150 tonnes and spanning approximately 70 metres, the bridge has been designed by Knight Architects, ARUP and BMMjv (a joint venture between BAM Nuttall and Mott MacDonald). It has been positioned to provide dramatic views of the weir gates. The very narrow piers and curving underside of the bridge deck are designed to give the bridge a slender appearance when viewed from up or downstream.

The new footbridge reconnects the much-used Trans Pennine Trail to the north bank of the river, providing users with a gateway into Leeds.

In addition to these measures, the removal of a manmade island, known locally at Knostrop Cut, which separated the canal and river has been removed to improve a bottleneck for flows. 180,000 tonnes of material excavated from the site has been reused on a local development site and also on diverting the Trans Pennine Trail which previously went across the manmade island. Reusing this material has saved the project in the region of £6 million.

The earlier stages of the scheme included work at Woodlesford further downstream, which were completed in 2015 and proved effective during the December 2015 floods.

Environmental enhancements have been integral within the scheme design with fish and eel passes installed at both weirs.

Weirs have previously been barriers, preventing species such as salmon migrating from the sea to the spawning grounds further up the river. Salmon have recently been spotted in the River Aire for the first time in 200 years, and now that fish passes have been installed on Knostrop and Crown Point weirs, as well as others on the River Aire, it is hoped that chances of a spawning population of salmon in the river in future will be increased.

Otter ramps and holts have also been installed and will support the local population and 700 trees will be planted along the Trans Pennine Trail later this autumn.

“The LEP, alongside Leeds City Council, the Environment Agency and other funding partners, moved quickly to improve flood protection in Leeds following the Boxing Day floods of 2015.

“Local Growth Deal funding into the flood alleviation scheme helped to improve the standard of protection for the city while our £5m Business Flood Recovery Fund, launched just weeks after floods hit, supported businesses to reopen and local SMEs to get back on their feet.

“Safeguarding businesses and residents from issues such as flooding is integral to growing an economy and the opening of the Leeds Flood Alleviation Scheme Phase One today is a huge step forward in helping businesses flourish in what is fast becoming one the busiest economic areas of the City Region.”

December 2015 saw Leeds experience significant and widespread flooding with some of the highest river levels ever recorded. The flooding affected nearly 3,000 residential properties (including indirect impacts to high-rise accommodation) and 700 commercial properties.

A consultation on the second phase of the Leeds Flood Alleviation Scheme is now open until 16 November, to provide increased flood protection to communities upstream of the city centre. proposals include measures further upstream including the Kirkstall corridor which was badly hit by the floods as well as Stourton, an industrial area that was badly affected on Boxing Day 2015.

Images and video of the scheme including the moveable weirs and footbridge are available by contacting the press office, and some are offered for use below:

For a construction video for the Crown Point work watch here: https://www.youtube.com/watch?v=lElHY_ZksDk&feature=youtu.be To find out more about Phase 1 and Phase 2 of the Leeds Flood Alleviation Scheme please visit www.leeds.gov.uk/fas

At this time, Phase 1 of the Leeds Flood Alleviation Scheme offers a significantly increased standard of protection to the city centre. Following a process of commissioning work at both weirs and completion of works at Holbeck the scheme will offer increased protection against flooding that has a 1 in 100 chance of occurring in any one year plus a climate change allowance to 2069.

The Trans Pennine Trail will be temporarily closed this autumn for just over a week while tree planting work is completed. The timing of the planting is weather dependent and can only be done when all the leaves have fallen from the trees. If the mild weather we are currently experiencing continues, planting could be pushed back into late November.

Funding for the scheme has been contributed by the following:

The Growth Deal is being delivered jointly by the Leeds City Region Enterprise Partnership (LEP) and the West Yorkshire Combined Authority to boost jobs and growth across the whole of Leeds City Region.

About BAM Nuttall BAM has a worldwide reputation for delivering some of the most complex and challenging civil engineering projects and in the UK has delivered several significant schemes that are helping to shape modern Britain. The Royal BAM Group has a diverse range of customers in both public and private sector with an annual turnover of £5.5bn across all sectors employing over 25,000 people. Within the UK BAM Nuttall delivers significant civil engineering schemes in rail, marine, tunnelling, highways, remediation and water sectors, working with both its UK sister and European group companies to provide a complete service. BAM’s collaborative approach to delivery of challenging multidisciplinary projects includes Network Rail Frameworks, HS1, Crossrail, Borders Rail, London 2012 Olympics and LU Station upgrades. www.bamnuttall.co.uk

For every project, we create the blend of talent needed to create the right result – appropriate; cost, carbon and resource-efficient; safe, easy and swift to deliver and operate; reliable and resilient; delivering great outcomes. www.mottmac.com

About ARUP Arup has worked with Leeds City Council on the Leeds Flood Alleviation Scheme (Phase 1) since 2011. Arup is the creative force at driving force heart of many of the world’s most prominent projects in the built environment and across industry. From 92 offices in 40 countries our 13,000 planners, designers, engineers and consultants deliver innovative projects across the world with creativity and passion. www.arup.com

About Knight Architects Knight Architects is an architectural consultancy specialising exclusively in the field of bridge and infrastructure design, where it is recognised as a market leader within the UK and internationally.

Formed in 2006, the practice is founded on the unique experience, skills and passion for bridge design which Martin Knight has built up over more than twenty years in leading architecture and engineering practice. The award-winning studio of 18 now comprises a skilled team with extensive experience and market-leading skills working on world-class projects around the world, yet it remains true to its founding principles: that good design is vital and that memorable and beautiful solutions are based on a clear understanding of function, context, budget and time.

The practice believes that infrastructure is a very important component of both the built and natural environments – highly visible forms that have a significant impact on their locality – and its work has been recognised with awards for bringing community benefits, as well as for design, and received the Specialist Consultant of the Year Award at the NCE / ACE Consultants of the Year Awards 2015; the first time an architectural practice has been recognised in these engineering-focused awards. The practice has been awarded BD Infrastructure Architect of the Year 2017. 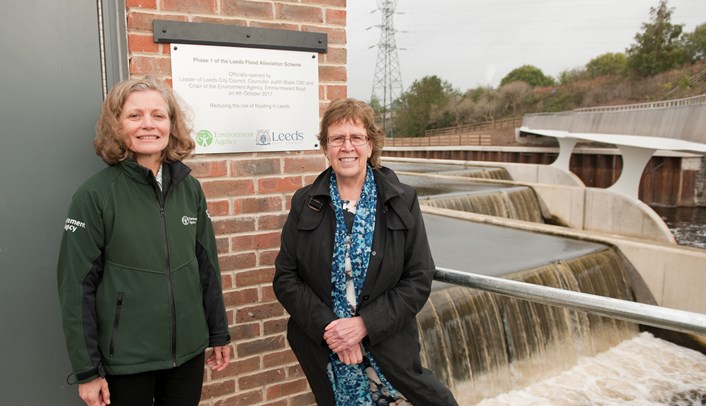