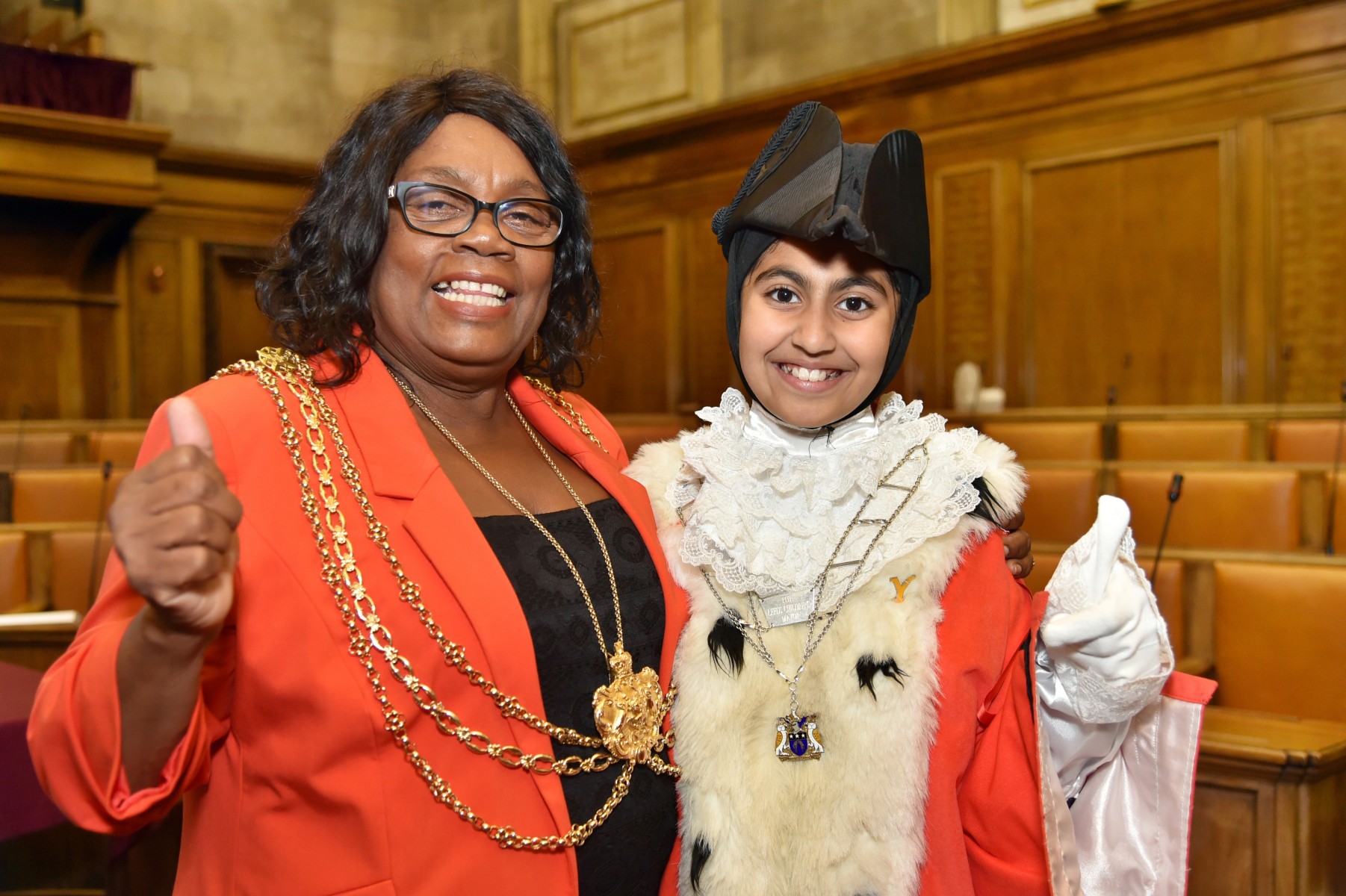 On Tuesday 1 October, Wania Ahmad from Harehills Primary School was announced as the new Leeds Children’s Mayor by Lord Mayor of Leeds, Councillor Eileen Taylor, at a special event at Leeds Civic Hall.

Wania spent much of the summer holidays campaigning in an election that saw nearly 9,000 local children and young people cast their vote – a new record for the unique Children’s Mayor programme.

The Children’s Mayor programme fits within the wider vision of creating a Child Friendly Leeds where every child and young person feels like they can have a voice. Now in its 16th year, the programme is designed to help children in Leeds develop a greater understanding of democracy and the importance of voting, and to encourage them to think about the role they could play in improving their city or communities. A total of 48 schools submitted candidates this year and these were shortlisted to the final 12 by a panel of children and young people representing Leeds Youth Council.

All 12 finalists were asked to write a short manifesto including an idea for how they would make Leeds an even better city for young people if they were elected as Children’s Mayor. In devising their manifesto, they were asked: How will their idea make a difference? Is the idea achievable and affordable? And who will benefit? Their manifestos covered diverse and inspiring themes such as reducing littering, helping child-refugees, tackling homophobia, helping the elderly, and supporting children with disabilities. Wania wrote her winning manifesto about an idea she calls “Chill & Chat” – a project for schools that would support the mental health and wellbeing of pupils.

Tuesday’s announcement marked the start of a year of unforgettable opportunities that Wania will experience as the new Children’s Mayor representing the children of Leeds. This will include switching on the Christmas Lights in Victoria Gardens, attending the Remembrance Sunday Parade, and taking to the stage at the annual Child Friendly Leeds Live! event on Millennium Square. Wania will also be invited to a full council meeting where she will ask for the council’s support to help make her manifesto idea a reality.

“I feel very proud to be able to represent the children of Leeds and I’d really like to thank all the people who have supported me and all the children who voted for me to be their new Children’s Mayor.”

“I’m overwhelmed and thrilled by the number of children who have been involved with electing the new Children’s Mayor of Leeds, including those who were nominated and all 12 final candidates. They are an inspiration, not only to their peers and other children, but to me, and to anyone working to help make Leeds the best city for children to live in. They should all be extremely proud of their achievement. And, of course, well done and congratulations to Wania on her winning manifesto and campaign.”

“Congratulations to Wania on being elected as the new Children’s Mayor of Leeds. Her winning manifesto focusing on the theme of mental health is truly inspiring. I’m delighted that a record-number of children in Leeds voted for their new Children’s Mayor to represent them this year. Giving our children and young people a voice is so important, and the Children’s Mayor programme continues to provide fantastic opportunities for them to have their say and help make a difference to their city and communities.”