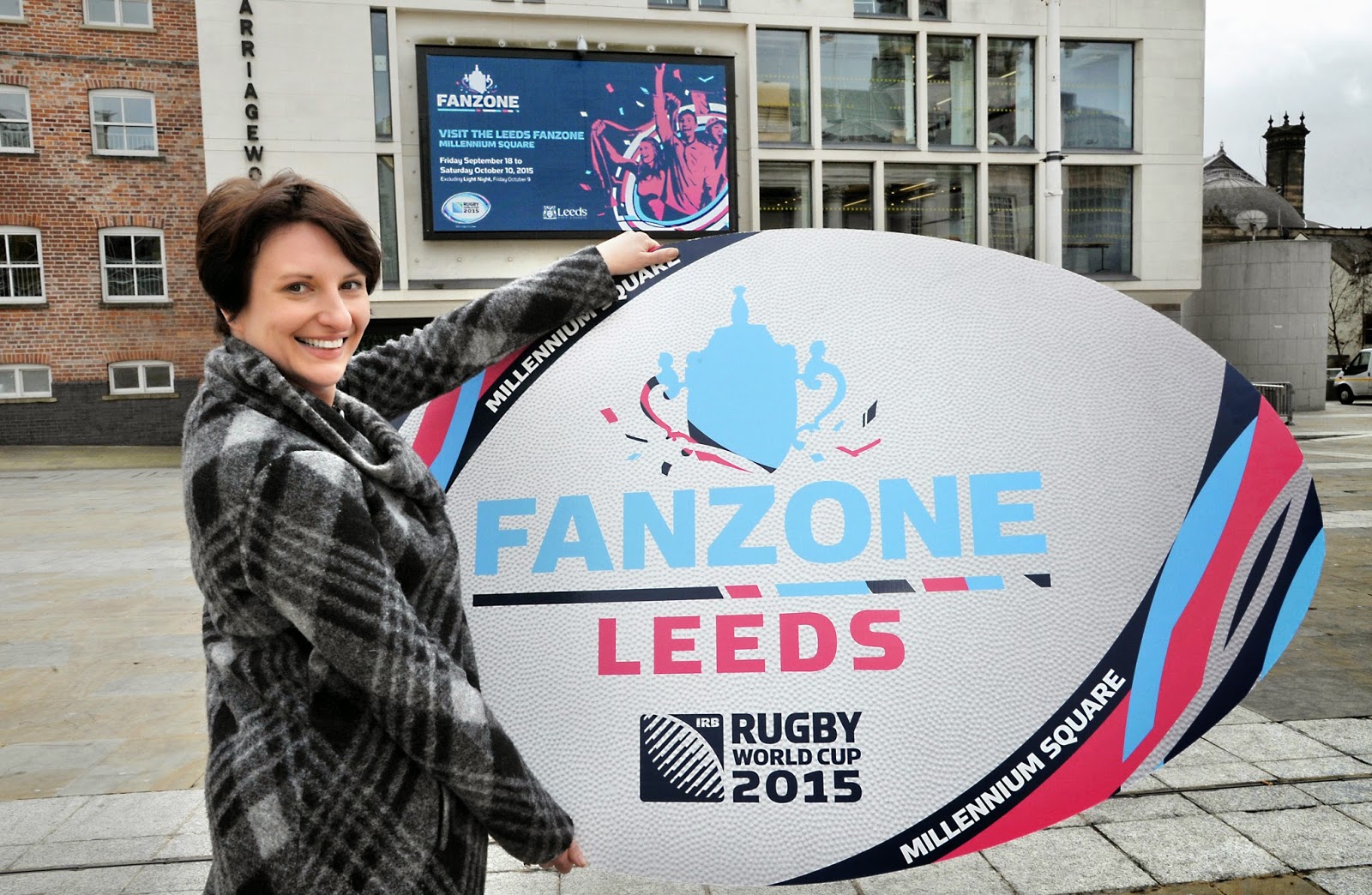 Thousands of fans will get the chance to have a ball on Millennium Square when Leeds hosts Rugby World Cup 2015 matches.

With a capacity of 5,000, the square will be the official site of Leeds’s Fanzone for the tournament.

The Fanzone will be free to access, screening a number of live games on the big screen as well as hosting food, drink and entertainment as part of a national celebration of rugby.

Not just for rugby fans, the Leeds Fanzone is one of 15 similar locations across the country that will see host cities providing all residents and visitors with the opportunity to enjoy the build-up to matches and be part of the atmosphere.

Details of the games that will be screened will be confirmed later in the year but the Fanzone will also include a dedicated activity area which will feature tag rugby, dance, and football alongside other cultural activities.

With something for everyone, the Fanzone will also offer specific inclusion days that will give groups from adult social care and children’s services a chance to join in.

Leeds will also get a visit from rugby’s greatest prize, the Webb Ellis Cup this summer as it tours the nation ahead of the tournament.

The Rugby World Cup Trophy Tour will launch with 100 days to go on June 10, and will see the iconic trophy visit a number of locations in Leeds from August 7-8.

It will then continue its tour, arriving at Twickenham Stadium on September 18 ahead of the Opening Ceremony.

The journey throughout the UK and Ireland aims to engage fans and give them the opportunity to build unforgettable memories as part of their own Rugby World Cup 2015 story.

The Trophy Tour will include hundreds of rugby clubs, rugby festivals and organisations from grassroots to the elite.

With Rugby World Cup 2015 taking place from September 18 to October 31 this year, Leeds will be hosting two games at Elland Road as part of a weekend of Rugby on 26-27 September.

“Millennium Square is the perfect place for Leeds’s official Fanzone and with thousands of fans there getting into the spirit, the atmosphere for the games will be amazing.

“The excitement for the tournament is really building across the city now and with the trophy itself coming to Leeds later this summer too, that’s going to create even more of a buzz.

“It incredible that Leeds will be hosting yet another world class sporting event and I’m sure Rugby World Cup 2015 will leave behind a lasting and memorable legacy.”

“With less than six months to go we are delighted to announce the locations of the Official Fanzones, alongside details of the 100 day Rugby World Cup Trophy Tour across the UK and Ireland.

“The countdown to Rugby World Cup 2015 is on and fans can now really begin to plan their Tournament experience, be it through watching the matches, through Fanzones, the Festival of Rugby and the Rugby World Cup Trophy Tour.

“The Rugby World Cup Trophy Tour will be the perfect opportunity to excite and engage fans across the UK and Ireland and make 2015 feel like the year of the rugby nation.”

Details on the Rugby World Cup Trophy Tour, including events open to the general public, will be updated at rugbyworldcup.com/trophy-tour in the coming months.

For more information about Rugby World Cup 2015 in Leeds visit www.leeds.gov.uk/rugbyworldcup2015 or follow us on twitter @RWC2015Leeds

To register and apply for tickets visit tickets.rugbyworldcup.com