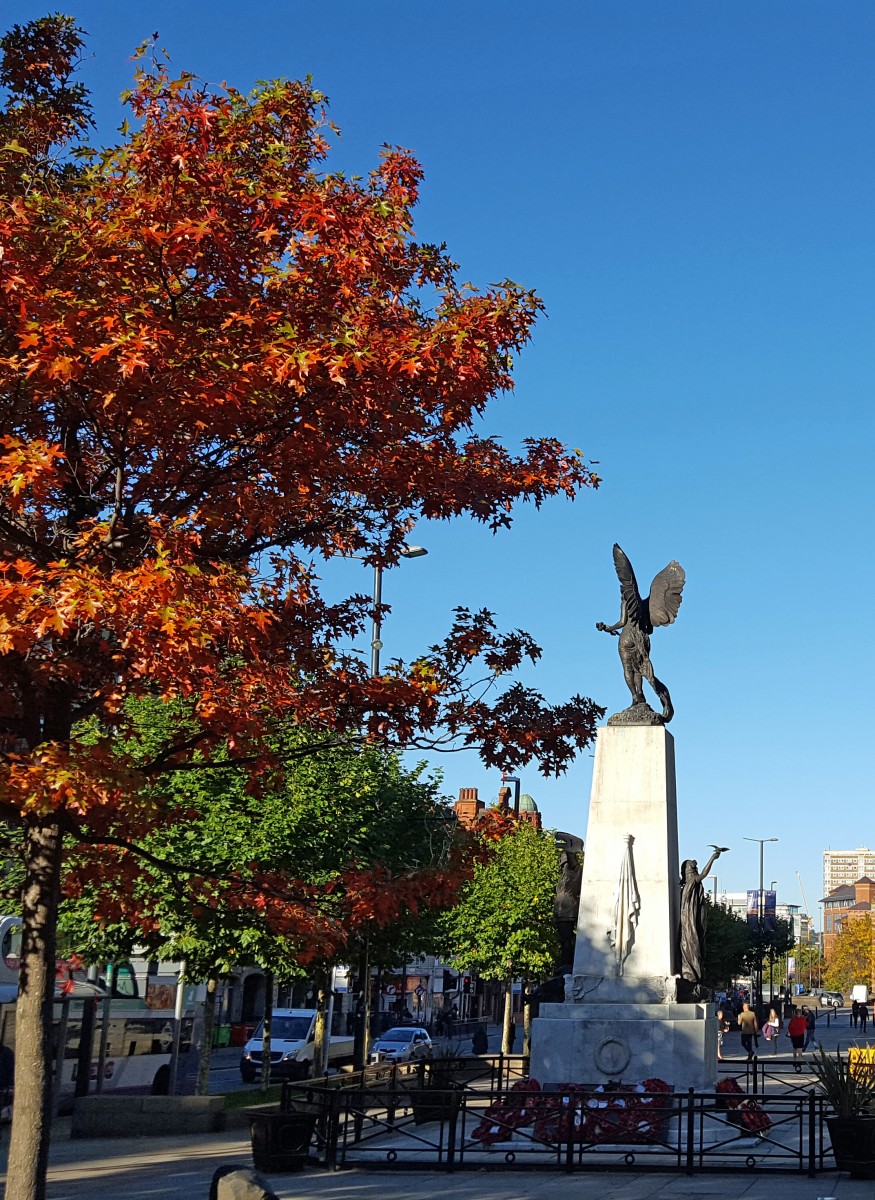 War memorial and Town Hall c 10 2018
The people of Leeds are invited to join the Lord Mayor, as the city marks Remembrance Sunday.

The Lord Mayor of Leeds Councillor Graham Latty will lead the tributes to service men and women who have lost their lives in times of conflict on Remembrance Sunday.

Held on Sunday 11 November, people of the city are once again warmly invited to gather at the war memorial on Victoria Gardens to join the Lord Mayor and other dignitaries as they lay their respective wreaths.

At 10.50am as is tradition, a procession will leave Leeds Civic Hall and head to Victoria Gardens where a number of wreaths will be laid, including one by the Lord Mayor on behalf of the people of Leeds. This will follow ex-service men and women plus members of ex-service organisations and current serving military organisations gathering outside Leeds City Museum before marching to the war memorial at 10.30am. Amongst those joining the Lord Mayor in the parade will be the Vice Lord-Lieutenant of West Yorkshire, Mr Tim Hare and the Leader of Leeds City Council, Councillor Judith Blake CBE.

Led by the Reverend Canon Sam Corley the Rector of Leeds and Chair of the Leeds Faith Forum, the multi-faith service will be shown on two big screens around the war memorial to allow members of the public not at the front to watch the proceedings.

This year sees the 100-year commemoration of the First World War ending, and wreaths will be laid to remember all those that served and lost their lives as well as remembering those who lost their lives in World War Two, the Falklands, the two Gulf Wars, and conflicts in Bosnia, Rwanda and Kosovo, Iraq and Afghanistan. Joining the Lord Mayor at the wreath laying will be the Mayors of Dortmund and Siegen in Germany. Both Dortmund and Siegen are partner cities of Leeds, and the Mayors are travelling over especially for Remembrance Sunday.

At 11am there will be a two minute silence which will be preceded by a bugler who will sound the Last Post.

After the service, the Lord Mayor and civic representatives will proceed to the steps of the Town Hall where a salute and march past will take place. Members of all communities across Leeds are warmly invited to join the Lord Mayor on Victoria Gardens to mark Remembrance Sunday.

“The service which we hold each year on Remembrance Sunday at the war memorial on Victoria Gardens is always an extremely emotional occasion, and I look forward to welcoming the public on the day as we remember and pay tribute to all those who have lost their lives while serving in our armed forces.

“The huge sacrifices which have been made by so many of our service men and women should never be forgotten, and Remembrance Sunday is an occasion where as a city, we can all come together, reflect and say thank you. It fills me with great pride to be laying a wreath on behalf of the city as part of Remembrance Sunday, in what is also the 100th year commemoration of the ending of the First World War.”

A number of events and activities are being held in Leeds to mark the 100 year commemoration of the First World War ending. For more information, please see: https://www.leedsinspired.co.uk/commemorating-wwi