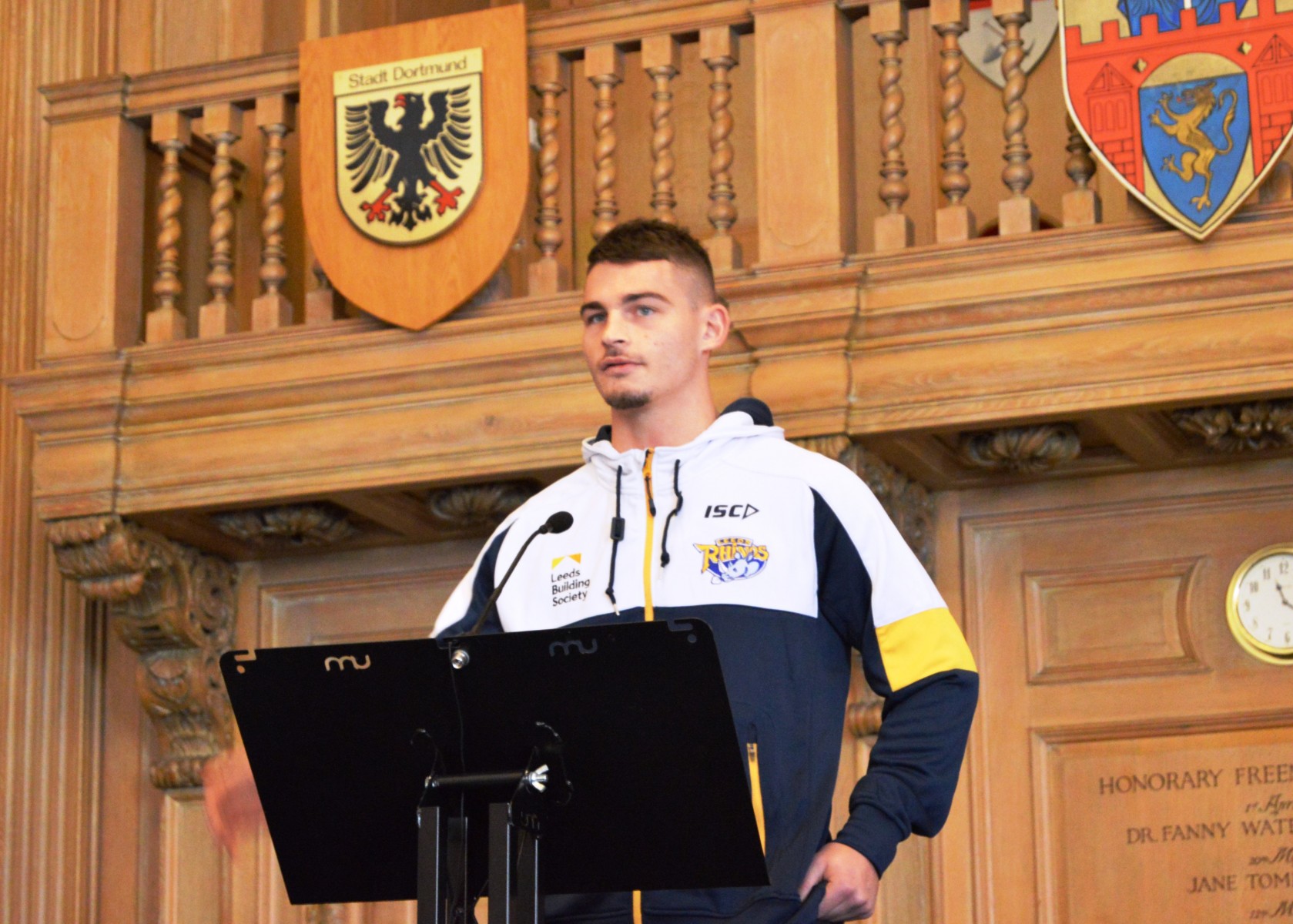 Issued in partnership with NHS Leeds

The 23 year-old player has spoken about his own experiences of depression that developed when he was put out of action by series of injuries in 2015 and 2016. He shared his personal story and support at the official launch of the new Future in Mind Leeds Strategy at Leeds Civic Hall on Tuesday 7 February.Stevie talked of the pressures he felt as a teenager, juggling his studies and training. He said: “As a 16 year-old I was always striving to achieve a lot. I struggled a bit when I couldn’t play due to injury. My identity wasn’t there anymore. I felt like I wasn’t fulfilling my potential or being who people expected me to be. The low I was feeling was inevitable.”

He admitted he was initially “scared to death” about speaking out about his struggles but since doing so, the support he has had from his team has been huge and says he can see culture shift, with more people being honest about when they are finding things tough.

The event yesterday set out how the NHS in Leeds and Leeds City Council will work together to tackle mental health, social and emotional wellbeing for 0-25 year-olds over the next four years, focussing on 11 priorities that have been shaped around what young people and their families have said they need.

These include providing more early help, a dedicated programme in schools called MindMate Champions, an enhanced eating disorder service, and The Springwell Academy; a new £45 million investment into specialist provision for children with Social Emotional and Mental Health needs (SEMH). Many of these developments are already well underway and set to launch in 2017.

The event was opened by Councillor Lisa Mulherin and Councillor Rebecca Charlwood and was attended by more than 150 leaders from across health, social care and education who were all asked to make a pledge; a commitment to playing their part in improving children and young people’s mental health.

“This collaboration between Leeds City Council, the NHS and key partners has helped create a pioneering strategy which works across health, education and the social care system, to improve the social, emotional and mental health of some of the most vulnerable children in Leeds.

“Our vision for this strategy is to develop a culture where talking about feelings and emotions is the norm, where it is acceptable to acknowledge difficulties and ask for help and where those with more serious problems are quickly supported by people with skills to support their needs.

“Underpinning this strategy is a positive and universal focus on wellbeing. We will build resilient communities to support social, emotional and mental health through a city wide continuum of support, thereby preventing and reducing the need for specialist interventions.”

Attendees were also treated to live music from pupils from Cockburn School and a special performance written by ex-Chumbawamba musician Boff Whalley and produced by arts and health charity Space2. ‘Ch ch ch ch changes’ is being rolled out to parents, carers and teachers and explores the concerns children have about leaving primary school, and the challenges parents and carers have to cope with as their child moves into adolescence.

1 in 10 children and young people aged 5 - 16 suffer from a diagnosable mental health disorder in the UK. (Young Minds UK)

More than half of all adults with mental health problems were diagnosed in childhood. Less than half were treated appropriately at the time. (Young Minds UK)

You can read more about the Future in Mind Leeds Strategy at www.mindmate.org.uk