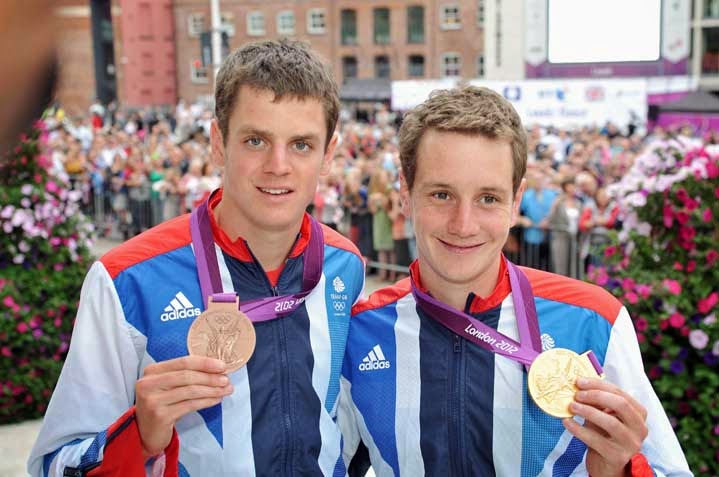 Caption: Leeds' triathlon stars (l-r) Jonathan and Alistair Brownlee (shown here in Leeds celebrating their Olympics success) could be taking on the world's best in their home city next year

Leeds could play host to another major international sporting event next year as the city is being considered to stage a round of the prestigious ITU World Triathlon Series.

If successful it would give Leeds’-own triathlon superstars Alistair and Jonathan Brownlee the chance to compete in front of packed crowds and in an atmosphere similar to the unforgettable Tour de France Grand Départ in the city last summer.

National governing body British Triathlon selected the Leeds bid which has been led by Leeds City Council with support from Sport Leeds, Welcome to Yorkshire and other key stakeholders. Olympic champion Alistair Brownlee and bronze medallist at London 2012 Jonathan Brownlee have advised on a potential race route in the city, which could see the Leeds-based brothers compete in front of a home crowd in one of the final races before the 2016 Olympic Games in Rio.

“The ITU World Triathlon Series is about delivering world-class racing in iconic locations and Leeds will guarantee to do just that. I am sure that spectators will line the route and the city centre will be full of fans cheering on the athletes as we cross the finish line.

“The Tour de France Grand Départ 2014 demonstrated how much the people of Leeds and Yorkshire love sport, and the opportunity for not just myself but also for athletes from around the world to race in front of crowds like that will create an unforgettable event. It will create a platform to inspire the local community to get involved in the sport and continue the proud triathlon tradition within Yorkshire.”

The event in Leeds would see Olympic-distance elite men’s and women’s triathlon races start with a 1500m swim in Roundhay Park, before making the transition onto a 40kilometre bike route into the city centre where they would complete a number of circuits before finishing with a 10km run through the heart of Leeds in front of possible crowds in excess of 40,000 spectators lining the free-to-view route.

The event would be supported by a mass-participation event which it is hoped would attract thousands of entries from people keen to take part in one of the fastest-growing sports in the UK.

Similar to the Grand Départ, the council would look to involve local schools, communities and stakeholders in developing a programme of cultural events and activities in the build up to and around the event weekend for everyone to get involved. There would also be the possibility for volunteers to help run the event.

The calendar of ITU World Triathlon Series events for 2016 is expected to be announced by the ITU in May, and Leeds City Council’s executive board at its meeting on 22 April will be asked to fully endorse the bid and the preparations which would be required in the event of the bid being successful.

“Following on from the success of our local athletes at London 2012 and the amazing Tour de France Grand Départ, Leeds and Yorkshire is now well and truly on the international sporting map and hosting a round of the ITU World Triathlon Series would be another fantastic world-class event to showcase our city and county live around the globe.

“I’m sure thousands of people would come out to watch the world’s best triathletes in action, and of course the possibility of seeing Alistair and Jonathan Brownlee race in their home city for free in front of a passionate Leeds and Yorkshire crowd would be something very special to see and experience in terms of an incredible atmosphere similar to the Tour de France. And with the mass-participation element and cultural events and activities like the Grand Départ it would be something everyone could get involved with. We are just waiting to hear with fingers crossed now if we have been successful.”

A leg of the series has previously been held in the UK since 2009 in London’s Hyde Park (except 2012 when it was the Olympic venue), but Leeds has now been put forward by British Triathlon as the preferred city to take over hosting a British round for an initial three years.

“We are excited about the opportunity to bring the ITU World Triathlon Series to Leeds, which is a city with a great passion for triathlon and an equal ambition to make the event a huge success.”

If the bid is successful, staging the event would be a further major coup for Leeds, attracting another international sporting event with a global profile to follow on from the success of the 2014 Tour de France Grand Départ plus hosting matches in the 2013 Rugby League World Cup, the new Tour de Yorkshire cycle race and Rugby World Cup matches being held in the city later this year.

It would also continue the strong sporting legacy in Leeds from London 2012 and the 2014 Commonwealth Games, and would further endorse Leeds as a triathlon city as it is home to one of British Triathlon’s World Class Performance Centres at Leeds Beckett University.

The bid fits with the council’s ambitions to make Leeds the most active city in the UK, encouraging people to not only take up triathlon but the component elements of swimming, cycling and running and lead healthier lifestyles. It also matches the council’s focus on making more use of Leeds city centre for major events to raise the profile of the city and boost the local economy.

“Bidding to host a leg of the ITU World Triathlon Series in Leeds is a perfect fit for our aims and ambitions as a council and city as it would not only bring major benefits in terms of the economy and profile-raising, it would be ideal to help encourage people to get fitter and lead healthier lifestyles.

“Triathlon is an amazing sport and more and more people are taking it up, partly because of the influence of the incredible Brownlee brothers who are fantastic role models and ambassadors for Leeds. But also because it is made up of three elements – swim, bike and run – so even focusing on just one of those is a great way of getting fit.”

If Leeds is successful the cost of hosting the event each year is expected to be £230,000, but it would be expected to generate economic benefit to the city from visitors coming to watch the race and increased tourism from being seen around the world as with the Tour de France.