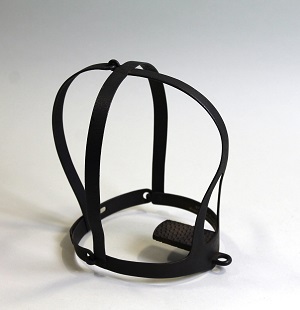 One of the more gruesome items in the Leeds Museums and Galleries collection, the grisly-looking scold’s bridle is a relic of a far less enlightened age.

Also known as a brank, the scolds bridle is believed to have been used in England as early as 1574 and was employed as a punishment for people, usually women, who spoke out of turn.

The solid iron frame was placed on the offending person’s head, enclosing it, and an iron plate that was sharpened or covered with spines was located near the mouth.

The plate was placed in the mouth so the victim could not move their tongue without injury and, with the brank on their head, the unfortunate individual would then be led through the streets on a chain held by one of the town’s officials.

Some towns would also chain them to the pillory, whipping post or market cross.

This particular Leeds was collected by Morley historian Norrison Scatcherd (1780-1853) who left it to the Leeds Museum where it has been in the collection since 1863.

It is one of many exhibits in the collection showcasing the history of crime and punishment in Leeds, including deadly poisons that used to be available over the counter and vicious-looking man traps that were used to protect private property.

The scold’s bridle can be found at the Leeds Discovery Centre astate-of-the-art storage facility, also home to more than a million different pieces including elephant skulls, a medieval log boat, mummy bandages and meteorites.

Leeds Museum Discovery Centre is located 1.5 miles south from the city centre, near to the Royal Armouries Museum. Visits are by appointment only.

For more information and details on how to book, visit: http://www.leeds.gov.uk/museumsandgalleries/Pages/discoverycentre.aspx