Leeds men urged to make a pledge against violence against women 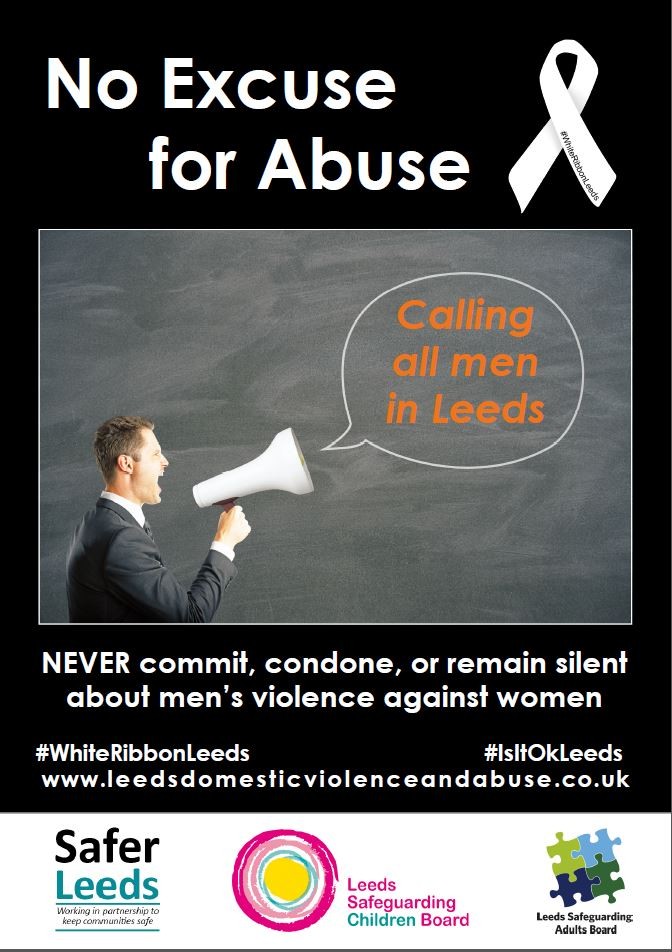 Men across Leeds are being encouraged to pledge their support for a campaign to end violence against women.

As part of the international 16 Days of Action and White Ribbon campaigns Leeds City Council has set itself the challenge of encouraging at least 1000 men across the city to show their support and pledge they will not commit, condone or remain silent about violence against women.

White Ribbon ambassadors and volunteers will be taking to the streets, offices and businesses of Leeds next week to raise awareness of domestic violence and ask men to make their pledge. They will also be able to signpost people to the appropriate advice and guidance about any domestic violence concern.

When: Tuesday 22 November at 4pm

Where: Leeds Civic Hall courtyard (to the rear of the building)

Members of the media are invited to attend a ‘street briefing’ session for around 40 ambassadors and volunteers by Leeds City Council’s executive member for children and families Cllr Lisa Mulherin and chief executive Tom Riordan. All of the volunteers will be wearing White Ribbon campaign T-shirts and white ribbons will be available for use in the photographs.

White Ribbon ambassadors from Leeds City Council and a wide network of volunteers will be raising awareness throughout the city on Friday 25 November at locations including:

To make a visual and public pledge, men will be asked to have their photograph taken in a large campaign ‘photo frame’ which can then be posted on social media with the hashtag #WhiteRibbonLeeds.

Leeds was the first city in England to achieve White Ribbon City status in November 2010. The White Ribbon campaign is an international campaign encouraging men to think about their behaviour and that of others and to pledge ‘never to commit, condone or stay silent about domestic abuse’. It recognises that most men are not violent towards women but encourages all men to show their support.

The White Ribbon campaign day, Friday 25 November, marks the start of the 16 days of action to end violence against women which runs until Saturday 10 December. This year Leeds is focussing on helping people to understand that abuse comes in all forms, such as coercion, financial or sexual abuse and doesn’t necessarily just mean physical violence.

Leeds City Council and its partners have supported 16 days of action since 1999. This year’s 16 days of action will also build on the successful “Get comfortable talking it” campaign from last year, which encouraged the people of Leeds to pose any questions they had about domestic violence to get the city talking about it more openly.

In Leeds it is recognised that men can also be victims of domestic violence and that it also occurs in same sex relationships. However, significantly higher numbers of women experience violence and abuse; the abuse they experience is more lethal and more likely to lead to serious injury or death. There have been 17 domestic homicides in Leeds since 2011 and all the victims were women. This is a pattern that is replicated across the country.

“Tackling domestic violence and abuse is one of the greatest challenges facing the city, which is why we have made it a top priority to address. The physical and emotional damage to victims can last a life time.

“We estimate that one in four women will experience domestic violence and abuse at some time in their lives. We also know that many victims still keep silent and a major part of our work is to raise awareness and encourage more women to come forward for help and support.

“Domestic violence and abuse is a serious social and criminal issue. It impacts on the lives and wellbeing of thousands of citizens of Leeds every day. Campaigns like this, not only help raise awareness but also help people talk about it more openly and take a stand.

“Our vision is that Leeds is a city that has a zero tolerance approach to domestic violence and abuse, where individuals, families and communities are supported to reach their potential and lead safer, healthier and happier lives.”

For help and advice people can visit: www.leedsdomesticviolenceandabuse.co.uk or contact the Leeds Domestic Violence Service 24 hour help line on 0113 2460401. In case of immediate danger people should call 999.

Leeds men urged to make a pledge against violence against women