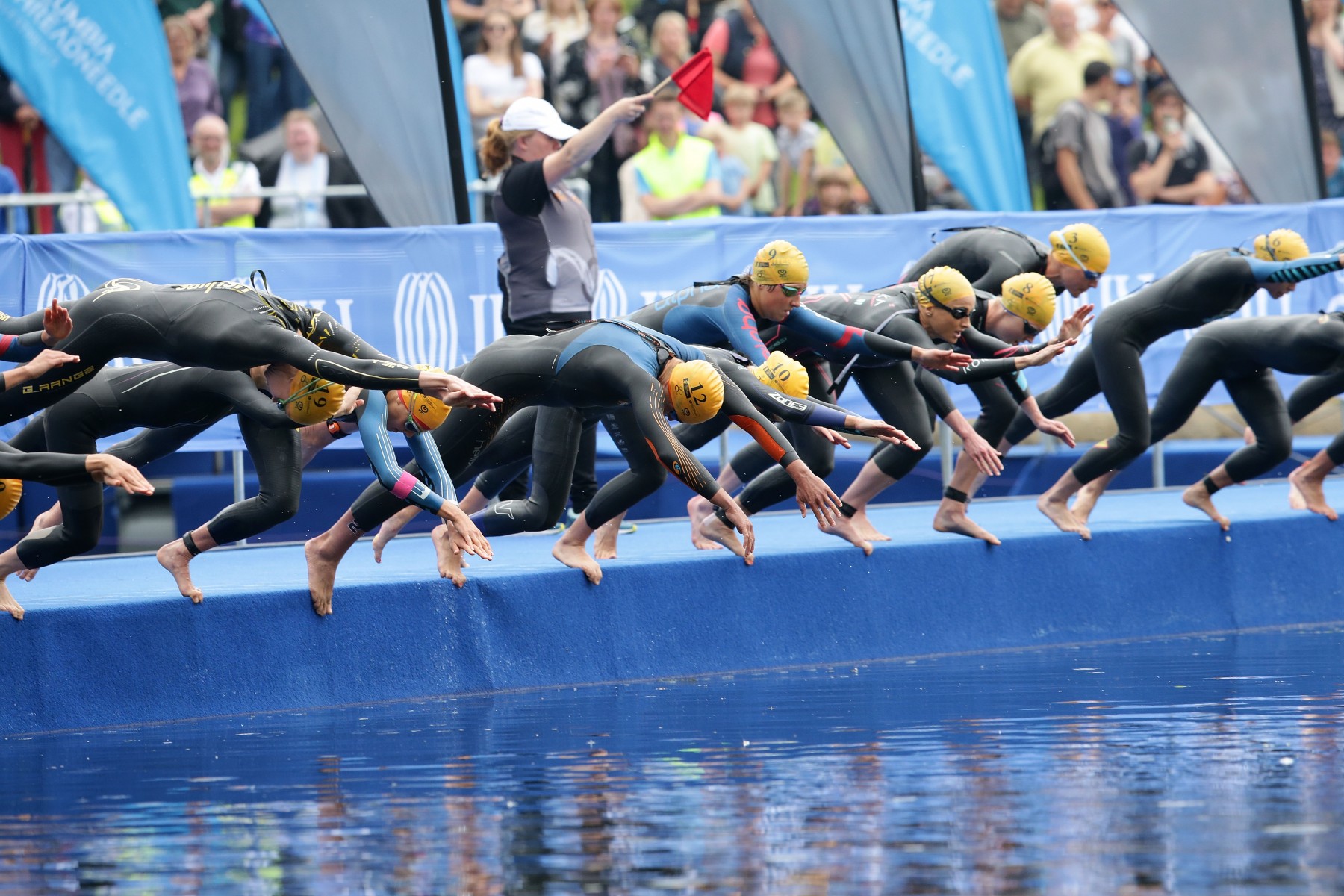 triathlonelitewomen1jpg.jpg
Don’t miss out on your chance to feature in the the AJ Bell World Triathlon Leeds.(credit Getty Images)

The International Triathlon Union (ITU) has today confirmed the ITU World Triathlon Series will return to the city of Leeds for a third successive year on 9 and 10 June 2018.

Last month, in excess of 70,000 spectators cheered on the world’s best triathletes including local heroes Alistair and Jonny Brownlee who celebrated a second successive one-two finish in Millennium Square as the city received a true triathlon takeover.

The elite races were broadcast live on the BBC with over 2 million people tuning in to watch the Brownlee brothers deliver a dominant performance in their home city. In the women’s race, World Champion, Flora Duffy of Bermuda won the title, receiving a huge roar from the knowledgeable crowd as she crossed the finish line on the blue carpet.

The elite stars of triathlon were joined by almost 3,000 amateur triathletes who took part in beginner and mass participation events across the weekend. Entries for the mass participation races will be open shortly, and with 91% of participant’s saying they would be taking part in the next staging of the ITU World Triathlon Leeds, organisers are urging triathletes and fans inspired by the 2017 event to register their interest for 2018 at http://leeds.triathlon.org/2018

The 2018 event will once again be supported by the National Lottery and organised by British Triathlon, in partnership with Leeds City Council, UK Sport and the ITU. Organisers will be looking to build on the high quality experience delivered for this year’s participants, fans and volunteers as the event aims to inspire even greater participation in the sport of triathlon.

“The Leeds leg of the ITU World Triathlon Series has been the standout race in the Series for the past two seasons and to be able to look forward to a third year in a row and go for a hat-trick of wins is really exciting. It’s very special to be able to race in my home city and to win in front of so many fans, is incredible."

“We are delighted to come back to Leeds, home of the Brownlee brothers, for the third year. It is always amazing to see the support of the people of Leeds to this event, the thousands of spectators cheering on the streets, and the city showcasing its best all over the world. And will be again superb to have the greatest triathletes in the world competing here, along with thousands of amateur triathletes.”

“Last month was a fantastic advertisement for the sport of triathlon and I hope the millions who watched have been inspired to get involved in our sport. To have confirmation of the 2018 event, shows the level of success of the Leeds leg of the ITU World Triathlon Series and the team can’t wait to deliver another outstanding triathlon experience for everyone next year.”

"We are extremely proud and excited that Leeds will have the opportunity to host its third ITU World Triathlon Series event in 2018. The atmosphere generated by the large crowds in attendance at the 2017 Columbia Threadneedle World Triathlon Leeds events was simply unbelievable and some of the best that the sport has ever seen. Next year's occasion promises to be just as spectacular and we look forward to welcoming once again both athletes and spectators to the city where they can be guaranteed another huge Yorkshire welcome."

“We are delighted the ITU World Triathlon Series is returning to Leeds for a third successive year. The city has staged two hugely successful editions of the event and it was fantastic to see over 70,000 spectators cheering on the streets of Leeds last month to create an amazing atmosphere for the world’s best triathletes. As we build toward Tokyo 2020, we are proud that the ITU World Triathlon Series in Leeds will be part of a package of international sporting events, backed by National Lottery funding, that we will stage in the UK over the coming years.”

Please visit http://www.britishtriathlon.org/media for British athlete profiles, free images* and general information about triathlon. *Please refer to image use restrictions in the gallery section of the site.

The ITU is the world governing body for the Olympic and Paralympic sport of triathlon and paratriathlon, and all related MultiSport disciplines. ITU is proudly committed to supporting the development of the sport worldwide through strong relationships with continental and national federations, working with its partners to offer a balanced sport development programme from grassroots to a high performance level. www.triathlon.org