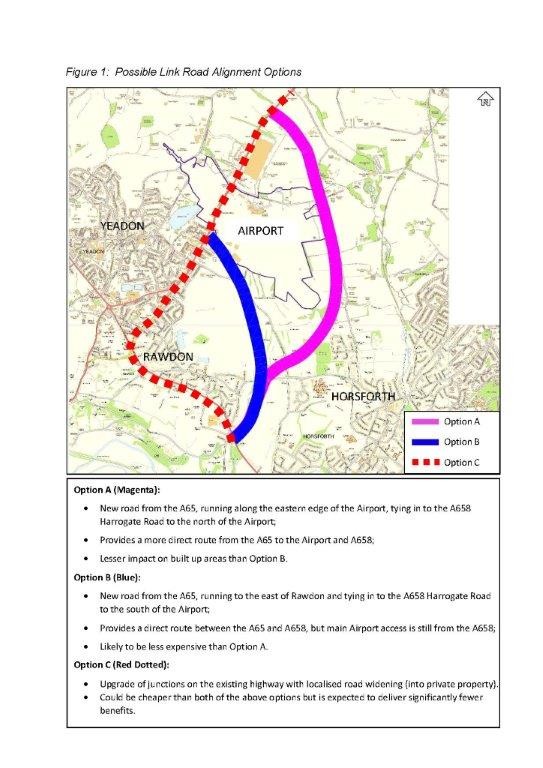 Initial information on options for improved road access to Leeds Bradford Airport has been released today.

The information issued by Leeds City Council outlines three options to improve access to the airport, which has been identified as a key transport need to boost the future Leeds economy, as well as tackling existing congestion issues in the local road network.

The information which can be seen at www.leeds.gov.uk/residents/Pages/Airport-Link-Road.aspx gives initial details ahead of a full consultation process which will take place before the end of the year.

Of the three proposed options, two would see the creation of a new link road while the third consists of widening existing roads and upgrading junctions.

The third option does not involve building a new road but upgrading the existing A65 and A658 around Rawdon and Yeadon to the airport. This would see junctions upgraded and where needed some road widening.

Full details will be available for the formal public consultation process which is expected to begin in November and will include drop-in sessions. Anyone interested in registering an interest to be given details of the sessions when they are finalised can email AirportLinkRoad@leeds.gov.uk

“Improving road access to Leeds Bradford Airport and tackling congestion issues on the local network is a priority for the city and region but we need to do it right which is why we are releasing this information now so people can see what we are proposing ahead of the full consultation process.

“The airport contributes more than £100millon a year to our economy, with its future growth essential to providing new jobs in the years and decades to come. That is why it is vital access to and from the airport is as effective as it can be while also serving the needs of the local communities, so we look forward to people considering the options and giving us their views when the full consultation process takes place.”

The scheme to improve road access to the airport is to be funded through the West Yorkshire Plus Transport Fund with Leeds City Council leading on its planning and delivery. For information visit www.leeds.gov.uk/residents/Pages/Airport-Link-Road.aspx

Leeds Bradford Airport (LBA) is one of the fastest-growing airports in the UK, used by 3.3million passengers each year, supporting 2,600 jobs and contributing more than £100m annually to the city region economy.

Between 2008 and 2013 passenger numbers rose by 16 per cent, and the Department for Transport forecasts its usage could rise to 7.1m passengers a year by 2030 and over nine million by 2050. Potential has been identified to expand the airport’s route network with new international connections opening up new tourism and trade markets as well as creating new jobs.