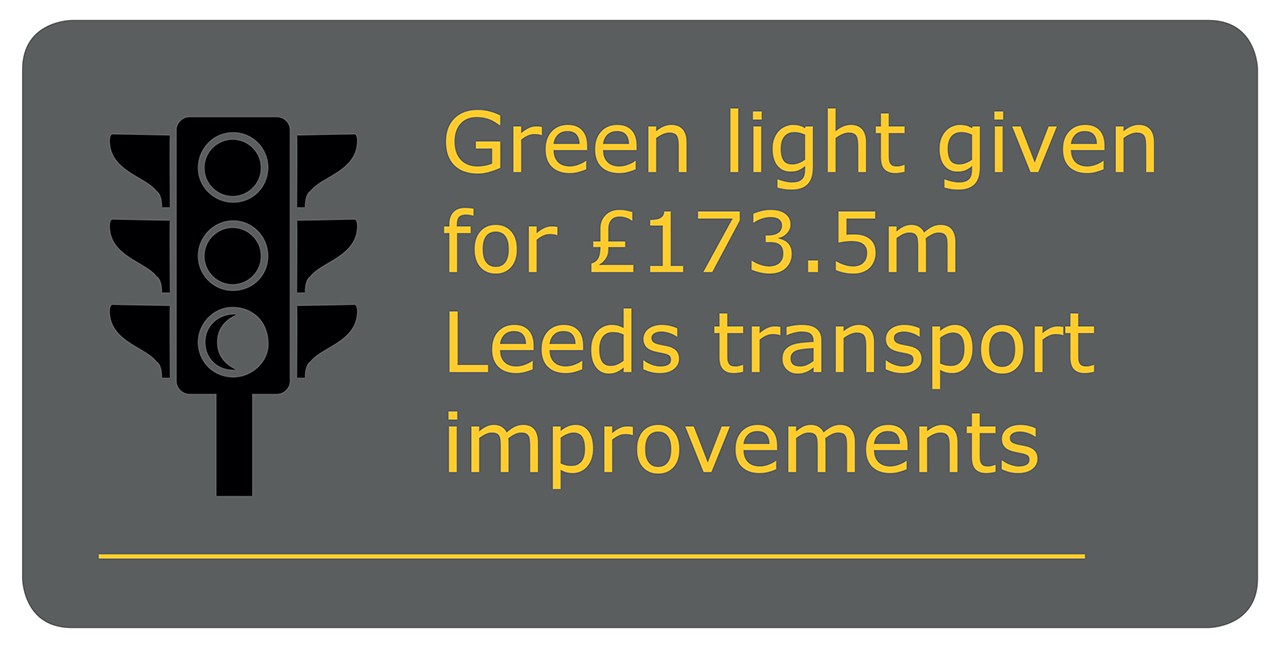 Proposals to bring about transformational improvements to public transport in Leeds have been given a major green light after government approval was confirmed today.

The Department for Transport (DfT) has expressed its support for £173.5million of funding to be invested in an integrated package of improvements in transport in Leeds including new park and ride services, bus priority lanes and modernised transport facilities across the city. The approval will also allow proposals to be further developed for new and improved rail stations including an airport parkway station.

The plans were unveiled in December following the results of the transport conversation held in the city, with the proposed improvements forming the start of a new long-term transport strategy for Leeds.

The £173.5m of funding was secured for Leeds following the decision not to proceed with the New Generation Transport (NGT) trolleybus last year, with the funds needing to be committed to public transport schemes before the end of 2021.

With the support the DfT has now given, Leeds City Council and West Yorkshire Combined Authority (WYCA) will now develop a range of improvements including:

Together with the £173.5m, additional support from West Yorkshire Combined Authority and private sector stakeholders including £71m investment from First West Yorkshire to provide at least 284 new low-emissions buses for Leeds by the end of 2020 increases the total funding package available to in excess of £270m.

“We are delighted that the Department for Transport has given its support for our plans which have the potential to transform public transport in Leeds, with improvements we can deliver in the coming years in keeping with what the people of Leeds told us they want to see. That is making it quicker and easier for everyone to be able to move around the city as well as connecting people and businesses to places and jobs, increasing productivity and supporting major economic growth areas.

“We can now get on with working with our partners to develop and deliver these ambitious and exciting improvements, but it is important to stress this needs to be just the start of major investment in transport in Leeds and the region. Much more needs to follow, so we all must work together if we are to achieve the modern fully integrated transport network including a rapid mass-transit system that our city and the wider region needs as soon as possible.”

“These plans to build on successful developments on the county’s rail and bus networks are in line with the combined authority’s aim of developing a modern integrated transport network that benefits the whole of Leeds City Region. Better rail connections and more new stations linked into HS2 and Northern Powerhouse Rail and, based upon the popularity of Elland Road, further park and ride schemes such as the 1,000-space facility being built at Temple Green in east Leeds, will support economic growth and link people with new jobs that are being created.

“All of these developments will be designed to deliver the effective solutions that, through the recent countywide ‘Your Travel Your Say’ events and the transport conversation in Leeds, people have told us they want to see and to which West Yorkshire Combined Authority is committed.”

The first improvements expected to come forward are the new park and ride service at Stourton and additional bus priority measures, with the measures outlined aiming to double the number of bus passengers in the next 10 years from the current 250,000 bus journeys made every day in Leeds.

The strategy also looks to encourage more walking and cycling on people-friendly streets, promoting a healthy Leeds through better air quality and reduced carbon emissions due to more use of public transport.

The plans have been supported and guided by the West Yorkshire Combined Authority and the Leeds transport advisory panel. The panel is chaired by Director of Strategy for Transport for the North Nigel Foster, and includes leading transport experts and senior figures from transport bodies and organisations, along with representatives from the worlds of business, education, planning, accessibility, equalities and campaign groups.

The transport improvements form part of the wider Leeds City Region economic plan which aims to deliver up to 35,000 new jobs and an additional £3.7billion of economic output by 2036.

The new strategy is in response to the findings of the biggest-ever transport conversation held with residents, businesses, stakeholders and visitors in the city which included more than 8,000 people taking part in a survey last year. The feedback was for deliverable improvements through better rail and bus services, a clear demand for additional park and ride services, congestion issues to be addressed along with improved accessibility to bring communities, businesses and jobs closer together to boost connectivity and the overall economy and productivity of Leeds.

The new Leeds Transport Strategy and the full list of members of the Leeds transport advisory panel can be seen at www.leeds.gov.uk/transportconversation

Additional improvements to rail services in Leeds through Rail North franchise negotiations will see increases in capacity through longer trains and more frequent services, especially at peak times. The outdated pacer units will also be withdrawn by 2020.

The Department for Transport forecasts usage of Leeds Bradford Airport could more than double to 7.1m passengers a year by 2030 rising to over nine million by 2050. Along with improved access by rail, Leeds City Council is also currently considering three options for enhanced road access to the airport with an update to be released shortly.