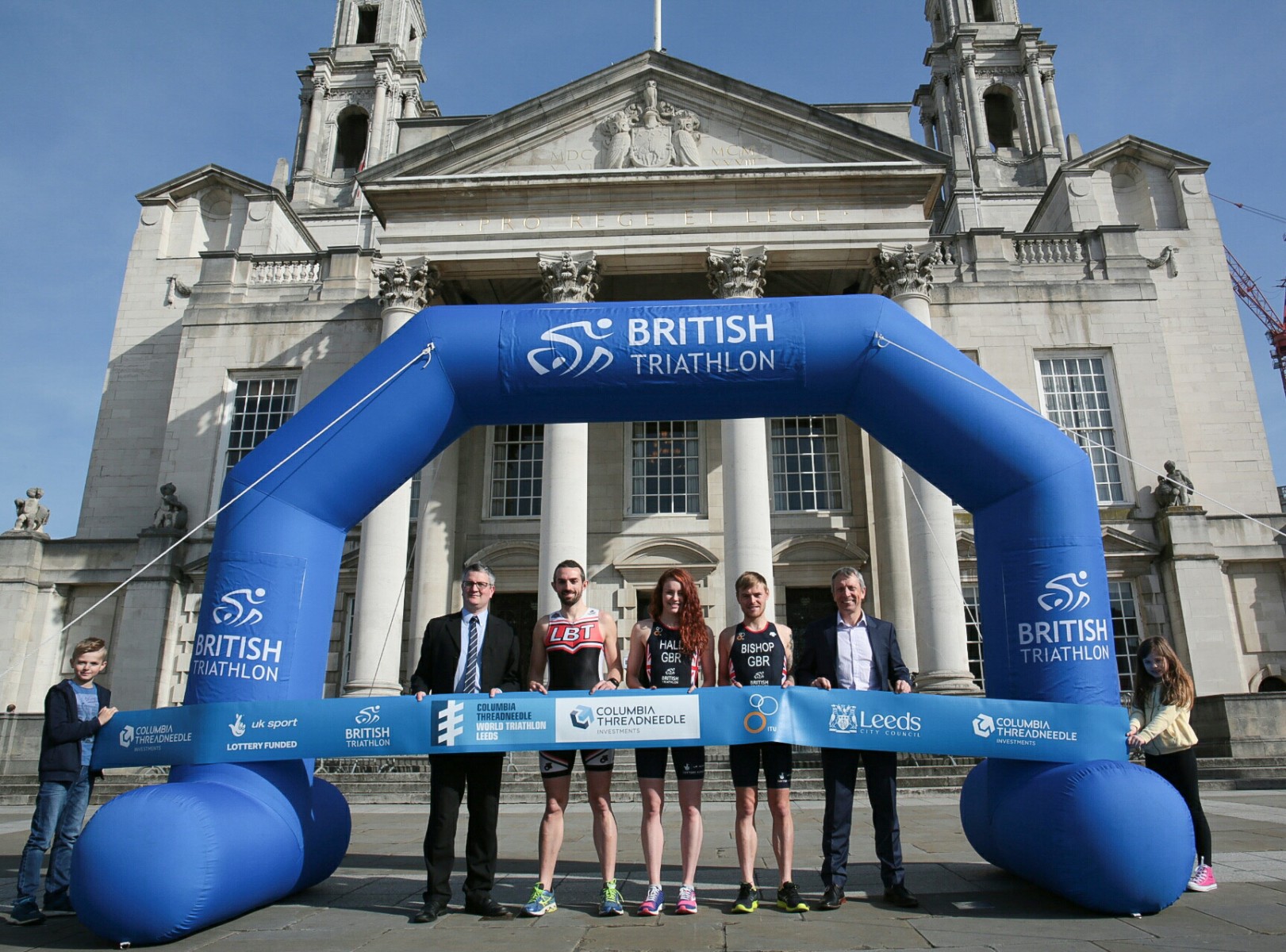 Today, 3 April, witnesses the general sale launch of grandstand tickets for 2017 Columbia Threadneedle World Triathlon Leeds, the most prestigious triathlon event in the UK this year. Following a double sell-out of tickets in 2016 there is once again an opportunity to take in unrivalled views of Columbia Threadneedle World Triathlon Leeds from the spectator grandstands on Sunday 11 June 2017.

Officially on sale to the general public from 10:00am this morning, grandstand ticket holders will be able to enjoy the famous blue carpet experience watching the world’s best triathletes including local heroes Alistair and Jonathan Brownlee, with ideal views of both the second transition and the all-important finish line in Leeds’ iconic Millennium Square.

The much-anticipated UK Sport National Lottery-funded event, organised by British Triathlon in partnership with Leeds City Council and the International Triathlon Union (ITU) will host many of Team GB's Rio Olympians who will once again return to Leeds. The grandstand provides sports fans from across the country the unique opportunity to get closer to the action and see their favourite triathletes racing on home soil.

Ticket holders will see the elite athletes pass them seven times on the bike and four times on the run, as well as witnessing the conclusion of the races, which often end with a thrilling sprint finish. A big screen will be located opposite the grandstand, showing live coverage and commentary, ensuring ticket holders can stay up to speed with the race as the action unfolds around Leeds city centre.

A priority window saw hundreds of tickets snapped up and with the grandstand able to seat around 1,600 triathlon fans, organisers are encouraging individuals to secure their tickets early to avoid disappointment. Tickets will be priced at £30 for adults and £20 (plus booking fee) for children (U18s) and can be purchased online here. With the women’s race starting at 13:00 and the men’s at 15:45, ticket holders can expect well over four hours of live triathlon action direct from the best seats in the house.

“We are really looking forward to the Columbia Threadneedle World Triathlon Leeds this June which promises to be another brilliant and unforgettable occasion.

“The atmosphere in Leeds at last year’s event was electric, and we cannot wait to see Millennium Square once again being the place where fans can share the incredible blue carpet moment with the sport’s greatest athletes.”

Jack Buckner, Chief Executive of British Triathlon, said: “We have worked tirelessly to ensure that this year’s Columbia Threadneedle World Triathlon Leeds will be an unmissable experience for all involved.

We are now excited to offer the best seats in the house to the public, so they can truly be at the heart of the action in just over two months’ time.”

Global Head of Brand and Marketing at Columbia Threadneedle Investments, Rupert Pybus said: “The public release of grandstand tickets is an exciting moment for the event. We are delighted to support what will be an excellent display of both elite and amateur triathlon in the UK and can’t wait to hear the roar from the spectator grandstand in Millennium Square.”

Great Britain elite triathlete Tom Bishop, said: “The local crowd is so important, it’s great to hear your name shouted and it just gives you that little bit extra. As an athlete you really want to give the fans something to cheer about and put on a show. The Columbia Threadneedle World Triathlon Leeds is a huge event for the sport and I think fans from around the country should come to Leeds and try and get the best possible seat in the city within the grandstand on Millennium Square.”

Opportunities are still available for athletes of all abilities to warm up the course on Sunday morning, with sprint and standard distance events offering a unique ‘point to point’ course.

The mass participation races provide athletes with the unique opportunity to compete on much of the same course as the world’s best, before participants have the opportunity to take their seats in the grandstand for a well-deserved rest. Alternatively, triathletes can return to the Columbia Threadneedle World Triathlon Leeds Event Village located in the heart of Roundhay Park. In-between the two elite races British Triathlon Championship medal ceremonies will be held here, making the Event Village the location of choice for aspirant medallists.

The 2017 Columbia Threadneedle World Triathlon Leeds will be organised by British Triathlon, in partnership with Leeds City Council, UK Sport and the ITU. For more information and to enter, please visit http://leeds.triathlon.org.

Becky Hewitt on 07824 145083 or beckyhewitt@britishtriathlon.org

Tom Goldspink on 07795 415452 or tomgoldspink@britishtriathlon.org

Please visit http://www.britishtriathlon.org/media for British athlete profiles, free images* and general information about triathlon. *Please refer to image use restrictions in the gallery section of the site.

Columbia Threadneedle Investments is a leading global asset management group that provides a broad range of actively managed investment strategies and solutions for individual, institutional and corporate clients around the world. With more than 2000 people including over 450 investment professionals based in North America, Europe and Asia, we manage £369 billion1 of assets across developed and emerging market equities, fixed income, asset allocation solutions and alternatives.

All figures as of 31 December 2016. 1 Source: Ameriprise Financial Q4 2016 earnings release. Past performance is not a guide to future performance. The value of investments and any income is not guaranteed and can go down as well as up and may be affected by exchange rate fluctuations. This means that an investor may not get back the amount invested. This material is for information only and does not constitute an offer or solicitation of an order to buy or sell any securities or other financial instruments, or to provide investment advice or services. Columbia Threadneedle Investments is the global brand name of the Columbia and Threadneedle group of companies.

The ITU is the world governing body for the Olympic and Paralympic sport of triathlon and paratriathlon, and all related MultiSport disciplines. ITU is proudly committed to supporting the development of the sport worldwide through strong relationships with continental and national federations, working with its partners to offer a balanced sport development programme from grassroots to a high performance level. www.triathlon.org