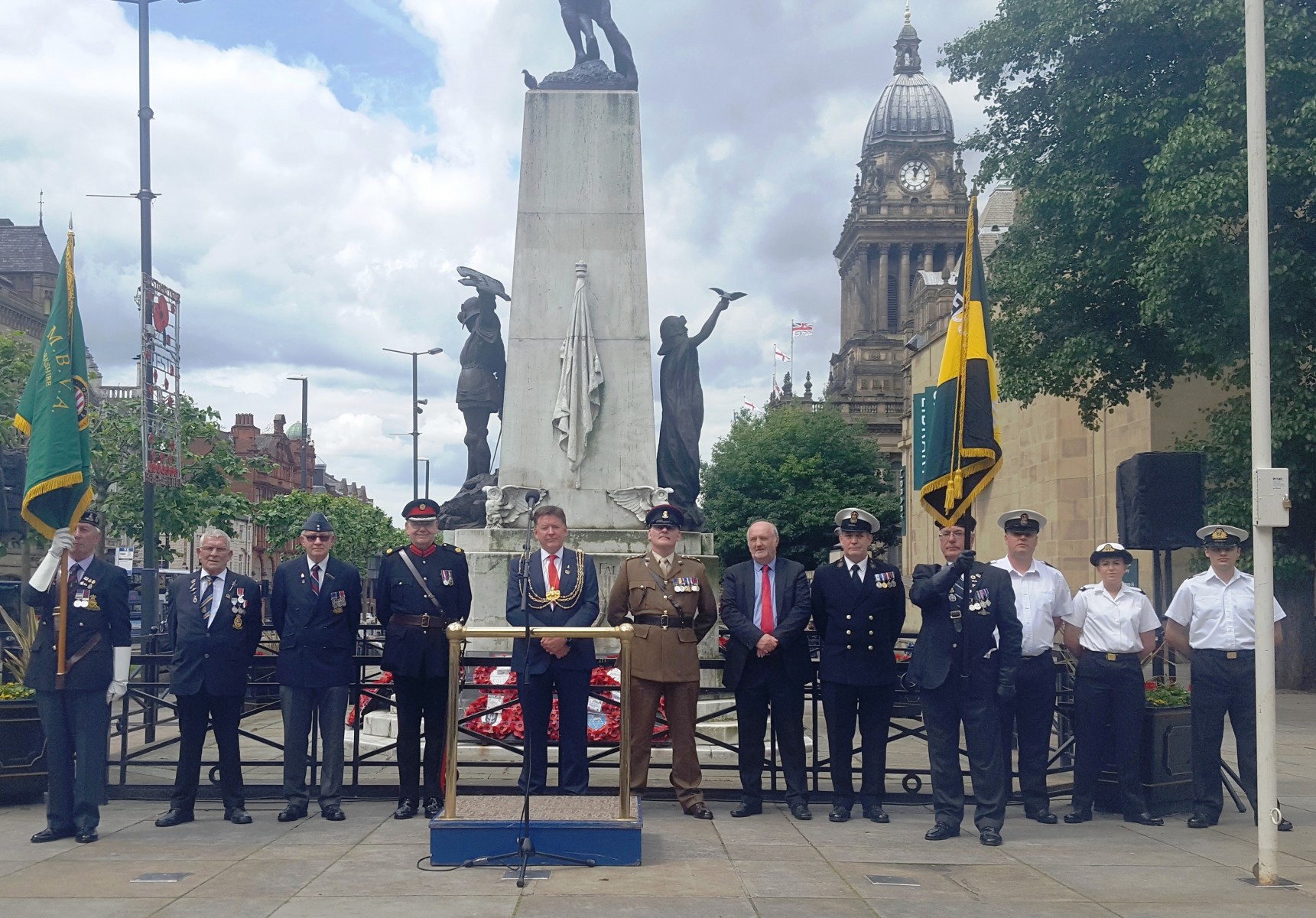 Ahead of a very special day this Saturday which will recognise and celebrate the tremendous professionalism, dedication and commitment of the British Armed Forces, the official Armed Forces Day flag has been raised over landmark civic buildings in Leeds.

Following a ceremony led by the Lord Mayor of Leeds Councillor Gerry Harper, the Armed Forces Day flag is now flying proudly next to the war memorial on Victoria Gardens and above Leeds Town Hall and Leeds Civic Hall as the city prepares to mark national Armed Forces Day on Saturday June 25 2016.

As always a packed programme of events, activities and entertainment will be on offer as part of the free event, which will take place in a number of locations in the city centre including Victoria Gardens, Cookridge Street and the front of Leeds Town Hall from 11am-4pm.

Included in the festivities at 12noon will be a march through the city centre featuring representatives from the Armed Forces and veterans featuring service men and women and also cadets from across the city. This will be followed by a variety of displays, military vehicles and military-related stalls; with family-friendly activities perfect for all the family. On offer includes a climbing wall, Breeze Boot Camp and fun, themed crafts. The contribution of veterans is always a very important part of Armed Forces Day, and people of all ages will have a chance to meet and speak to them about their experiences as a member of the British Armed Forces. A wide range of performers are also once again all set to entertain the crowds on a specially constructed stage situated on Cookridge Street. In what also promises to be stand out moment, a Drum Head Service is set to take place on the steps of Leeds City Art Gallery.

Leeds has a proud and historic link with the British Armed Forces, which includes in 2012 the council signing the Armed Forces Community Covenant. This covenant ensures that a variety of support, help and guidance is available to in-service personnel, veterans and their families. In 2015, Leeds City Council also signed up to support a project by the Armed Forces charity RBLI (Royal British Legion Industries) on an initiative called RBLI LifeWorks courses to reduce levels of unemployment among ex-service personnel living in the region.

To keep up to date on Leeds Armed Forces Day, please see: www.leeds.gov.uk/armedforcesday or Facebook at: https://www.facebook.com/Leedscouncil/

“The city of Leeds is immensely proud of our armed forces, and I was extremely honoured as Lord Mayor to be given the opportunity to raise the Armed Forces Day flag in Victoria Gardens, ahead of what promises to be another memorable and amazing day on Saturday.

“What is great about Armed Forces Day is that the people of Leeds have the opportunity to not only thank serving members of our armed forces day for everything that they do at home and abroad, but also recognise and celebrate the tremendous contribution of veterans.

“Once again we have put together a programme that people of all ages can enjoy, and I look forward to seeing another great crowd enjoy the variety of activity, events and entertainment on offer.”

“The response from the public of Leeds and partners to Armed Forces Day has been simply unbelievable, and it is with great pride that we can now say the event is now one of the most popular in our city’s civic calendar.

“Leeds of course has deep and historic links with our armed forces and as a council we are determined to provide any support that we can to events such as this one and also to serving personnel and veterans such as through our community covenant which was signed in 2012.

“In what is now tradition the day will begin with a march by service men and women, cadets and veterans, and as always there will then be so much to see and do afterwards in and around Victoria Gardens.”