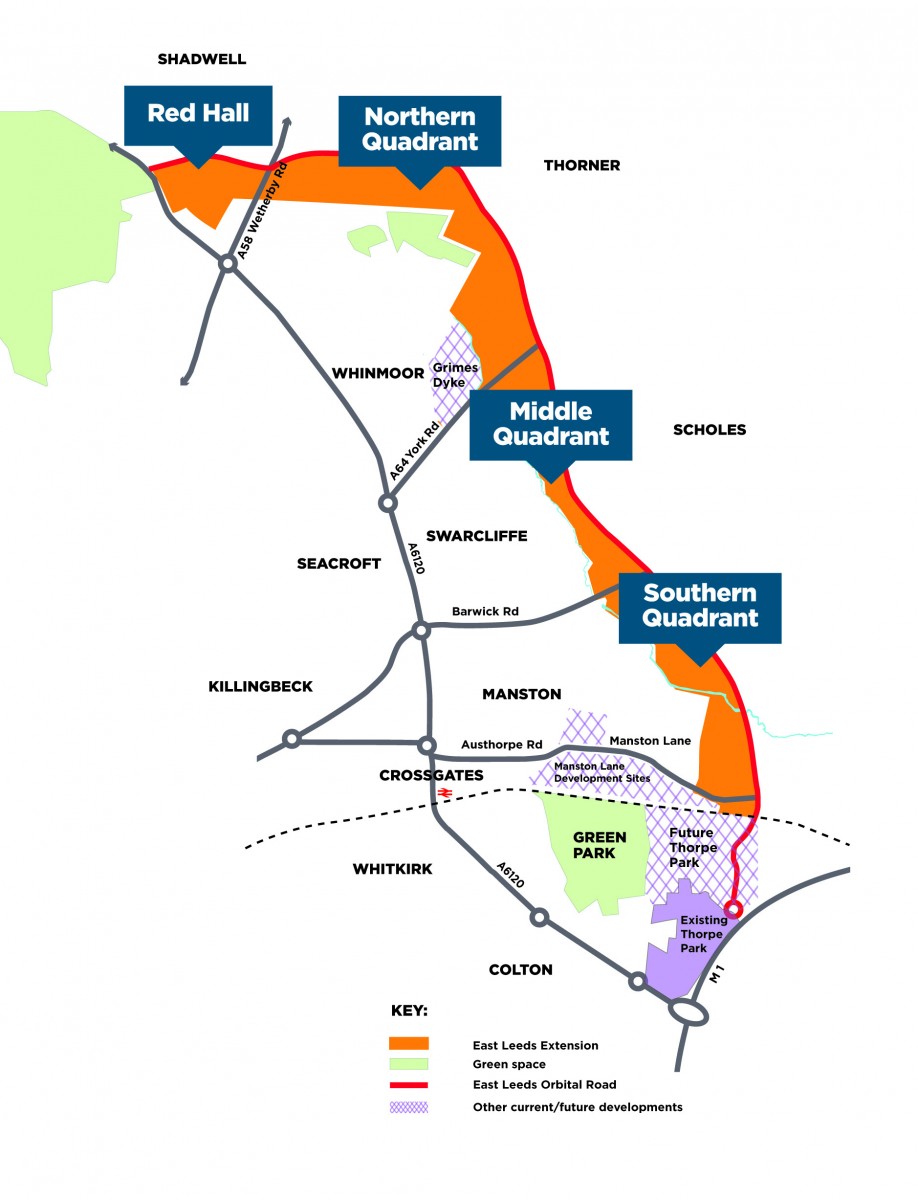 Major road and transport improvements to East Leeds have taken a further step forward as Leeds City Council has made a Compulsory Purchase Order (CPO) and Side Roads Order (SRO) for the East Leeds Orbital Road (ELOR). The Orders will help ensure work can progress on the East Leeds Extension, enabling the delivery of around 5,000 new homes in this major strategic growth area for the city.

The CPO and SRO have been put in place as a fallback position should any negotiations with land owners fail for the acquisition of the land and property needed to construct and open the ELOR.

“Leeds City Council doesn’t make the decision to use compulsory purchase powers lightly. This is one of the biggest infrastructure schemes Leeds has seen for several decades, supporting development of a significant area of housing and employment growth. That is why it is important the council takes the necessary and appropriate steps to ensure progress is made, as well as making sure all statutory procedures are followed.

“The council has already discussed the land acquisition needs for the project with the affected landowners for many months and it is anticipated agreement can be reached without needing to use these powers, which are only ever used as a means of last resort to assemble the necessary land.”

The CPO covers land required for ELOR, which will include a new dual carriageway, segregated cycling and pedestrian facilities and extensive associated landscaping between the Outer Ring Road at Red Hall and Manston Lane. The SRO relates to changes required to the local highway network as ELOR is delivered, including diversions of public rights of way, closure of some junctions, as well as some alterations to private accesses.

Formal notices are being sent to affected parties and objections to the CPO will need to be made by 28 March 2018. The closing date for objections for the SRO is 20 April 2018.

All the CPO documentation can be seen in hard copy at libraries across east Leeds – including Crossgates, Seacroft, Whinmoor, Scholes and Shadwell; at the city centre ‘one-stop’ at 2 Great George Street and on the council website at https://www.leeds.gov.uk/residents/east-leeds-extension.

Objections to the CPO and SRO must be made in writing to:

Representations can also be made via e-mail to nationalcasework@dft.gsi.gov.uk stating the name of the order and the grounds for objection.

The East Leeds Extension (ELE) is a large area of undeveloped land extending over 250 hectares around the edge of Swarcliffe, Whinmoor and Crossgates, which has been identified for the development of around 5,000 homes. The development will require substantial new infrastructure, including a major new orbital road, known as the East Leeds Orbital Road (ELOR). The new link road will be located around the eastern edge of the housing allocation, linking the existing Outer Ring Road at Red Hall to J46 of the M1 through Thorpe Park.

The ELE programme will deliver in the region of 5,000 new homes on allocated land within the Site Allocations Plan Publication Draft and will play a major role in delivering the housing required to meet the Local Development Framework requirements for new homes across the city.