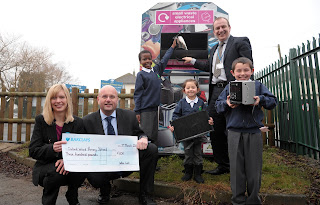 Three schools in Leeds are celebrating having been named the city’s top gadget recyclers.

Cheques for the schools that have recycled the most electrical items have been presented at a special celebration during Climate Week.

The council’s partner, Weee Link, collects the items to be broken down and recycled. Each term Weee Link reward the schools that have recycled the most with a cash prize to be invested in other green projects.

Climate Week and the prize-giving underlines the importance of recycling electronics – recycling gadgets saves significant energy and resources as it takes four times more energy to produce steel from raw iron ore than to produce it from recycled materials.

Much like bottle-banks, WEEE banks allow pupils, their families and school staff to get rid of their unwanted electrical items safely, ensuring the resources and materials they contain can be reused.

“Yet again, the pupils from all the schools involved have out-done themselves, but special congratulations go to Horsforth Newlaithes, Ireland Wood and Westerton primary schools for recycling so much.

“Climate Week is a great opportunity for us to all consider our impact on the environment in our everyday lives. Placing the WEEE banks in playgrounds is an ideal way to let people recycle at a place where it’s most convenient for them and importantly, let them recycle things they might otherwise throw away.

“The WEEE banks in schools have been a great success so far and with the continuing element of competition, I’m sure other schools will be vying for the coveted top spots and prizes.”

“We’re delighted that the pupils, their families and staff got so involved and that their efforts have been recognised.

“The WEEE bank has been a real talking point and has given us many opportunities to discuss recycling and our impact on the environment.

“In discussion with the pupils we’ve invested the money in additional resources for our organic garden and chicken coop.”

“We would like to thank all 30 schools that have chosen to take part in the scheme and promote Leeds as a trailblazer in electrical waste recycling.

“Congratulations to Horsforth Newlaithes, Ireland Wood and Westerton primary schools whose collections have exceeded our expectations and who have set an extremely high benchmark for WEEE recycling in schools.”

Throughout the autumn 2012 term all 30 schools with WEEE banks recycled a total of 2253kg of electrical items.

As well as electronics, a range of items can be recycled at the council's nine household waste sorting sites.

Currently over a third of all schools are registered with the Leeds sustainable schools framework working to improve their environmental performance across a range of areas including energy, waste, building, grounds and global links.