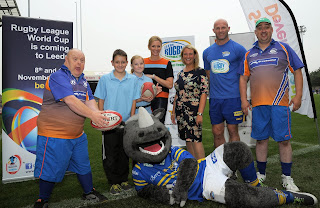 The largest dual code disability rugby event of its kind in the UK is taking place at Headingley Carnegie Stadium on Tuesday, 24 September, 10am to 2pm.

The National Disability Tag Rugby Festival is an annual event organised by Leeds City Council in partnership with Leeds Rugby, the Rugby Football Union (RFU) and Rugby Football League (RFL). Officials from the RFL, RFU, Leeds Rugby and local clubs will referee and coach the teams.

Around 150 people of all ages and abilities representing 12 to 14 teams from across Leeds, Yorkshire and the rest of the country will be attempting to dummy pass their way to victory at the home of rugby in Leeds.

The event is a fun and informal competition aimed at ambulant players with a learning disability and/or moderate physical or sensory impairment. Teams comprise of seven players with up to three substitutes.

Councillor Lucinda Yeadon, executive board member for leisure and skills said:"With Rugby League World Cup 2013 coming to Leeds in November, this is a great event to promote the sport and get more people involved in playing rugby no matter what their level of ability is.

"It is also a fantastic opportunity for people with disabilities to play on the main pitch at Headingley Carnegie Stadium, where reigning world champions New Zealand will play Papua New Guinea in six weeks’ time."

The BBC will be filming at the event for their ‘Get Inspired’ series, and will also be using footage featuring Gabby Logan for the launch of this year’s Sports Personality of the Year, which is being held at the First Direct Arena in Leeds this December.


Tag Rugby uses a minimal contact version of rugby, excluding scrums, line-outs or tackling. Tackles are made by removing material tag attached to each player’s belt and the game requires a lot of skill.

Rugby League World Cup 2013 kicks off on Saturday October 26, 2013 at the Millennium Stadium in Cardiff, with matches played in England, Wales, Ireland and France. The final on Saturday November 30, 2013 will be played at Old Trafford.

Two high profile games will be played at Headingley Carnegie Stadium; a group match between New Zealand and Papua New Guinea on Friday 8 November, and Quarter Final 3 on Friday 15 November. Tickets are available from the ticket office at Headingley Carnegie Stadium and the Leeds Visitor Centre at Leeds Railway Station, the opening hours of which are Monday 10am - 5.30pm, Tuesday to Saturday 9am - 5.30pm, Sunday 10am - 4pm. For more information please visit the website www.visitleeds.co.uk, email tourinfo@leeds.gov.uk, or telephone 0113 242 5242.