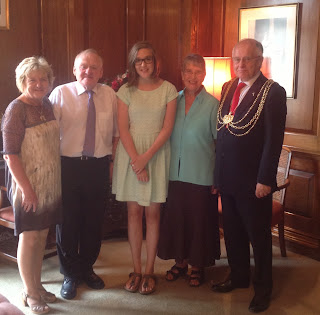 A Leeds resident who has dedicated a large part of her life to helping others has been thanked by the city’s Lord Mayor Councillor Thomas Murray.

This follows a letter from 14-year-old Molly Horner to the Lord Mayor, who asked if it might be possible for him to send a thank-you note to her grandmother Anne for all her hard work, before she moves to York.

So impressed was the Lord Mayor with Molly’s letter, which highlighted Anne’s efforts in working with and providing support to the vulnerable over many years, he invited the Horner family to meet with him in person at the Civic Hall for afternoon tea.

During her time in Leeds, Anne has previously worked for Childline and volunteered for Teen Challenge, who provide a wide-range of support to people with addictions such as drugs and alcohol, before moving to homeless charity St George’s Crypt.

To this day, Anne helps out in the kitchens or office at the Crypt, and currently as a volunteer at the Farsley Youth Development Project and at Caring for Life, a farm that offers a safe place to stay and work for vulnerable adults. This is along with helping out with many aspects of community life at a local church in Farsley.

Shortly Anne and husband Malcolm are leaving Leeds to enjoy their retirement in Haxby, York, and before their move, the Lord Mayor and the Lady Mayoress Edna Murray, met with the couple and Molly to express their gratitude on behalf of the city, for all her efforts.

"Having read Molly’s letter, which documented the selfless work of her grandmother Anne in helping vulnerable people over many years, it was a pleasure to invite the family to visit the Civic Hall so we could pass on the city’s thanks in person.

"People like Anne play such a valuable role in communities’ right across Leeds, and the fact is without their efforts, many important services would not be what they are today.

"Volunteers really do deserve all our praise and we would like to personally wish Anne and Malcolm all the best on their new life in York."

"We felt extremely privileged and humbled to be invited to meet both the Lord Mayor and Lady Mayoress at the Civic Hall.

"I thoroughly enjoyed the day, and it is certainly something that will live in our memories for many years to come."