Recycling gadgets pays out for schools 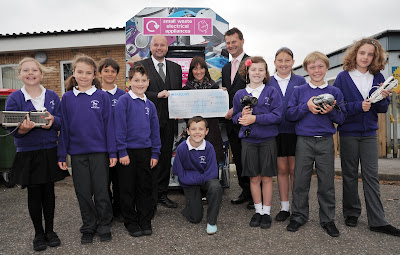 Schools in Leeds are being rewarded for recycling old electronic equipment that might otherwise have ended up in landfill.

Horsforth Newlaithes Primary School and Whitecote Primary School have been presented with cheques as a thank you for their outstanding recycling efforts.

The schools are two out of seventeen around Leeds to have Waste Electrical and Electronic Equipment (WEEE) banks installed. The old, unused gadgets and gizmos are collected by Weeelink, the council’s partner, and broken down to be recycled.

Much like bottle-banks, the WEEE banks allow children and their families to get rid of their unwanted electrical items in a way that is not only safe and environmentally friendly, but also benefits the schools.

When the WEEE Banks were first installed in July, Weeelink offered a reward of £50 to every school who could fill their bank by the end of term. Horsforth Newlaithes Primary School recycled a total of 92 electrical items. Whitecote Primary School came in second with 53 items.

“Well done to all the schools who participated, and congratulations to Horsforth Newlaithes and Whitecote primary schools on their fantastic achievements.

“This effort is inspiring in many ways and we hope the children and their families will continue to lead our city in becoming cleaner and greener, encouraging others to recycle and consider the long-term environmental consequences of their actions.

“I know that they will act as an example to their peers, and hope that they will continue to take advantage of the many services and locations to recycle across the city.”

“I am delighted with the efforts of staff, pupils and parents, and we are all proud of how much has been recycled in such a short space of time. We are looking forward to the new opportunities this reward will afford us and the children are excited at the prospect of developing more environmental projects as a result.

“This is a brilliant opportunity for us to talk about recycling and the environment. The great thing about the WEEE banks is that we're able to get parents and carers involved too.”

“It is a privilege to be able to recognise the achievements of the children, staff and parents of Horsforth Newlaithes Primary School and the contribution that you are making to electrical waste recycling. Your efforts are helping to highlight the importance of removing electrical waste from landfill.”

It is estimated that one million tonnes of electrical items are thrown away in the UK every year. Because of new developments in technology and the new trends that follow those developments, more and more people are using more and more technology, and gadgets are going out of style faster than ever before. Electrical waste of this kind is growing three times as quickly as any other type of waste.

Leeds City Council wants to make it easier for children and their families to recycle so that nothing valuable is wasted. With more and more schools in Leeds striving to become more sustainable, the WEEE banks let young people and their families recycle on their way to school and recycling becomes a part of everyday life.

Participating schools will be offered a new incentive for this academic year to encourage them to continue recycling gadgets. Each term there will be first, second and third prizes of £500, £300 and £200 for the schools that collect the most electrical equipment. School councils can spend this cash on developing new environmental projects.

Currently over a third of all schools are registered with the Leeds sustainable schools framework working to improve their environmental performance across a range of areas including energy, waste, building, grounds and global links.

Recycling gadgets pays out for schools