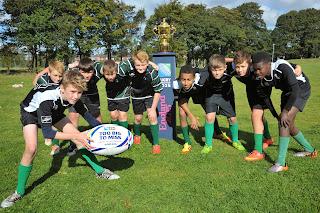 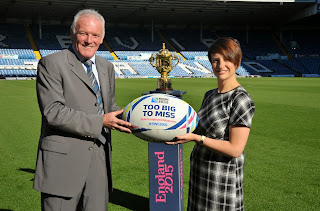 Today (Friday September 26) marks one year to go until the third largest sporting event in the world comes to Leeds.

The ticket application window for all games is only open for three more days at tickets.rugbyworldcup.com, closing at 6pm on Monday September 29. Matches that are oversubscribed will be balloted.

Games in Leeds offer real value for money with adult tickets starting from just £20, and a family ticket from just £70 for two adults and two children.

Leeds will also host a fanzone on Millennium Square for a period of time during the tournament, allowing fans to watch all other games being played, but also to involve residents and visitors to Leeds with the excitement around Rugby World Cup 2015.

“It is fantastic that we have already reached our one year to go countdown for this world class sporting event coming to Leeds.

“Tickets for both games are selling well, so I advise anyone who wants to be part of this fantastic Tournament and see world class teams playing in our city should register before September 29.

"Over the next year we will be working closely with the Rugby Football Union (RFU) to extend the reach of the game of rugby."

"It was fantastic news when Elland Road was selected as one of the venues for the Rugby World Cup in one year's time. There has been some great sporting drama at Elland Road over the years and all of us at Leeds United can't wait. Leeds is a great city with fantastic sporting tradition and to host a World Cup match is a great achievement for Leeds. There will be a special interest for me as the Stadium will be hosting my country Scotland as they take on the USA."

“Over the next year we will be working with the RFU to help extend the reach of the game of Rugby right across the city, through schools, sports clubs and other outlets.

"This is an exciting period with up to one million tickets on sale for Rugby World Cup 2015. With just under a year to go, it's the moment that rugby fans all around the world have been waiting for.

"We have worked hard to develop a ticketing system which makes the application process easy and efficient as possible, and offers flexibility to fans. Fans have 3 days left to apply, so there is there still time but people should start to consider what they would like to purchase.

"With prices starting at £15 for adults and £7 for children, it's a fantastic opportunity to watch the world's best teams play in some of the best venues in England and Cardiff.”

“It is essential that on the back of RWC 2015 we build a legacy for generations to come, and it was fantastic that the Webb Ellis Cup was taken to The Rodillian Academy in Leeds this week for pupils to get a close look at one of the most iconic trophies in sport.

“The Rodillian Academy is a part of the RFU’s All Schools programme, which is taking the game to state secondary schools that have not previously played rugby. We aim to get 400 schools involved by the start of Rugby World Cup 2015 and 750 by Rugby World Cup 2019 in Japan.

“It is an ambitious undertaking but we are on course, with another 100 schools having joined the programme this month to take us to 300 since All Schools was launched in 2012.”

For more information about Rugby World Cup 2015 in Leeds visit www.leeds.gov.uk/rugbyworldcup2015 or follow us on twitter @RWC2015Leeds