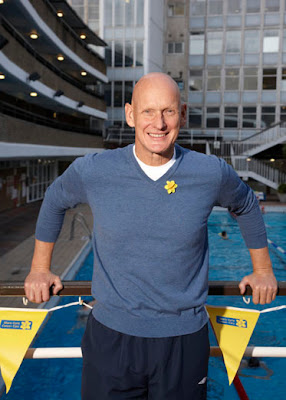 Caption: Olympic gold medallist Duncan Goodhew will be in Leeds on Monday

British swimming legend Duncan Goodhew will be in Leeds next Monday inspiring potential stars of the future.

The 100 metre breaststroke gold medallist from the 1980 Olympic Games in Moscow will be coaching a group of approximately 60 young swimmers aged eight to 12 at the Aquatics Centre at the John Charles Centre for Sport from 6:30pm-7:30pm on Monday 24 September.

The group of swimmers are all part of the City of Leeds Swimming Club, which won the right to have Duncan Goodhew visit after recruiting the most swimmers of any club in the country to take part in this year’s charity Swimathon Weekend event in April. As Swimathon President, Duncan will be passing on his tips and advice to the young swimmers during the coaching session to help them improve their techniques.

All media are invited to attend the coaching session at the Aquatics Centre at the John Charles Centre for Sport in Leeds on Monday 24 September. Duncan Goodhew will be available for media interviews from 6-6:30pm before the one-hour coaching session takes place. Media wishing to attend are asked to express their interest by calling Roger Boyde on 0113 247 5472 or email roger.boyde@leeds.gov.uk

“I am very much looking forward to meeting and teaching the Swimathon Weekend 2012 participants at the John Charles Centre for Sport on Monday. These young swimmers can expect to be put through their paces as I have a few Olympic drills to share which will not only inspire, but will ensure they go on to swim longer and faster than ever before.”

“We are thrilled to be welcoming Duncan Goodhew to Leeds and we know our young swimmers are going to enjoy meeting him and listening to what he has to say.

“The slogan of London 2012 was ‘inspire a generation’ and this fits in perfectly with that, as hopefully a future Olympic gold medallist or two will be in the group listening to someone who has been there and reached the very top of the sport.”

This year, 33 City of Leeds swimmers took part in the Swimathon Weekend raising £3,350 for charity.

Leeds City Council’s Leeds Swimming Training Scheme provides opportunities in the sport of swimming for all ages and from recreational to elite level. In total there are over 250 people taking part in the scheme on a daily and weekly basis.

For further information about the scheme email swimming.and.diving@leeds.gov.uk or call 0113 395 0001.

Swimathon started in 1986 and since then more than half a million swimmers have taken part, raising over £36 million for charity. For more information visit www.swimathon.org