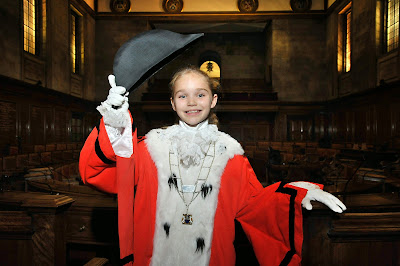 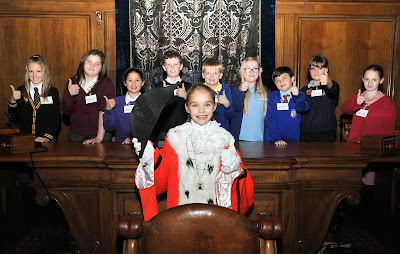 "Amy and the ten finalists in the Leeds Children's Mayor competition."

It has been yet another, well fought battle for the Leeds Children’s Mayor Competition. Out of ten finalists, the winner was 10 year old Amy Eckworth-Jones from Strawberry Fields Primary School.

Amy, who is in Year 6 won the position after children and young people across Leeds voted hers as their favourite of the 10 manifestos in the final.

Amy’s manifesto was entitled ‘Have fun, play safe’ and was based on one of the 12 wishes for a Child Friendly Leeds. These include; travel, healthy living, safe play areas and better learning for children. Each potential winner had to write a short manifesto, based on one of these wishes and out of 31 primary schools who entered, ten made it through to the final.

In her manifesto, she wanted a safe area for children to play games and hang out and not be in danger. Furthermore, Amy stated she would throw a fundraiser every two months for better equipment for this area. She also stated she would have different sections for older kids and teenagers.

Amy has already carried out her first official engagement, accompanying the Lord Mayor of Leeds to the switching on of the Leeds Christmas Lights. Amy will also have the chance to present her manifesto at a full council meeting in January amongst many other duties she will be involved with over the next year, including the Child Friendly Leeds Awards in January.

“When I found out I had won I was absolutely speechless, which is a first for me as I never stop talking! I wanted to become the children’s mayor so I can help children and make Leeds a better and safer place for children to grow up. I am really looking forward to going to the Child Friendly Leeds awards and a chocolate workshop!”

“What a marvellous achievement for Amy. She has shown some great ideas with her manifesto and I can’t wait to work with her in the future.

“As the new Children’s Mayor of Leeds, Amy will get the chance to be an ambassador for all children in Leeds and help us achieve our aim to be a Child Friendly City.

“The year ahead is very exciting and I am sure Amy will be involved in many of the events including the Rugby World Cup later next year and the Child Friendly Leeds awards in January.”

This press release was written with help from Dalton Ewan, who attends the Lighthouse School, when he ‘took over’ Leeds City Council’s press office as part of ‘Children’s Takeover Month.’