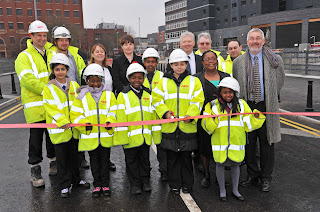 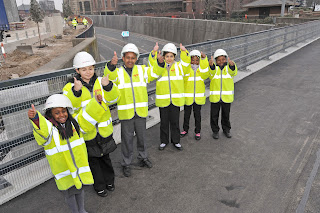 Access to Leeds city centre and Little London is now again be much smoother thanks to the reopening of the Lovell Park Road bridge on Monday.

Essential repair work to a bridge that carries Lovell Park Road over the A58(M) Inner Ring Road has now been completed allowing the road to re-open to two-way traffic two weeks earlier than originally planned.

The bridge was built during the construction of the Inner Ring Road in the late 1960s and a number of the bridge beams have deteriorated to a poor condition. These beams have been replaced and the bridge deck waterproofed and re-surfaced.

During the work, the bridge had to be closed to vehicles, restricting access to and from the city centre and to the Little London area to the north.

Pupils from Little London Community Primary School officially opening the new bridge on Monday and were the first people allowed to use the new bridge.