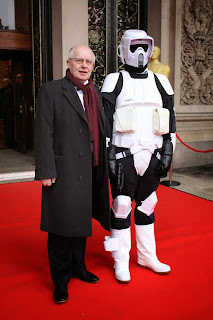 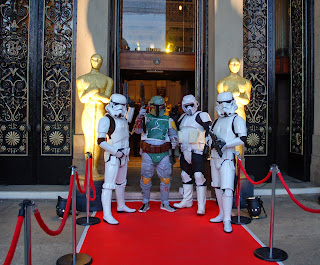 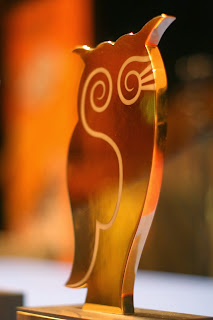 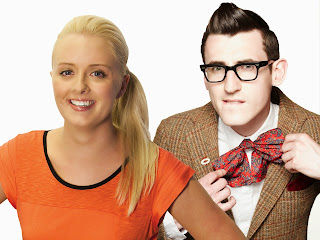 Picture caption:"CBBC's Katie Thistleton and Ben Shires who led the BAFTA Children's Behind the scenes event"

The 15th Leeds Young Film Festival (LYFF) enjoyed its grand finale on Friday with a closing gala screening of the classic French animation The King and The Mockingbird. The festival was a celebration the best cinema from around the world for children and young people, and welcomed families to enjoy an impressive programme of special guest appearances, workshops, activities and events at venues across the city, including Hyde Park Picture House, Everyman Leeds, Leeds Town Hall and Vue in The Light.

Stars of CBBC - Katie Thistleton and Leeds’s own Ben Shires – led the unique and interactive BAFTA Children’s: Behind the Scenes. The event was a showcase of the films, television, games and websites nominated at last year’s BAFTA Children’s Awards and saw the pair present a mixture of live demonstrations and interviews at the Hyde Park Picture House. The charming Edwardian venue celebrates its 100th Birthday this year, but was full of the spirit of youth as the pair took to the stage.

The LYFF featured a selection of events in anticipation of Tour de France. Electronic duo Animat performed a specially written live score to the animation Belleville Rendez-vous at Hyde Park Picture House and young people used a variety of bike parts to create some highly innovative sounds in the On The Bike Track Music Workshop. There were fantastic bike themed films including UPSIDEdown and Come On, Eddy!

The festival also saw a number of awards presented including the Leeds Young Filmmaking Golden Owl Awards, the ‘festival winners’ for the films that were enjoyed the most by our two young juries, by our audiences, and the INDIs (Independent Directions) Awards.

The award winners for new films screened at LYFF include those chosen by two juries made up of young people from across the city - the younger jury aged 8-14 years and the older jury aged 15 to 19 years:

The Older Jury said of Lad: A Yorkshire Story: ‘Beautifully shot amongst the stunning landscapes of the Yorkshire Dales, Lad is a heart-warming story which effortlessly engages its audience through its realism and simplicity.’ The runner up for both the Older Jury Award and the Audience Award was Ghost Graduation, from LYFF’s Best of Leeds International Film Festival selection.

The winners at the third annual Leeds Young Filmmaker Golden Owls Awards were:

• Westroyd Infant & Nursery School, in the Key Stage 1 category for ‘The Fish Detective’

• Seth Powell, in the Individuals (Under 11) category for ‘Max at the Museum’

• Interplay, in the Community Groups category for ‘The Clockwork Apprentice’

• David Young Community Academy, in the Key Stage 4 & 5 category for ‘Grannies vs. Demons’

• Oliver Broadbent, in the Individuals (16-19) for ‘The Man with Four Hearts – the Story of Eric Hunter’

Winners of the INDIs (Independent Directions) at the 15th Leeds Young Film Festival were:

Max at the Museum by Seth Powell

All Day and a Night by Matt Browne

Each age category winner received £100 from Leeds Young Film Festival towards their next project with Gone Fishin’ also picking up the £250 prize from the IAC for best overall independent short.

“Leeds Young Film Festival keeps on getting bigger and better every year! We’re doing our best to help make Leeds the UK’s leading child friendly city and this year we’ve welcomed families and young people to a greater selection of films, events and activities than ever before. We’re proud to be part of the wonderful year-round activity that makes Leeds somewhere that young people can feel always welcome, and participate in events that help them grow their skills and knowledge. It was tremendous to work with all our partners including Hyde Park Picture House, Everyman Leeds, Breeze and BAFTA to celebrate the talent that goes into creating films, television and games – and, of course, we wouldn’t have been able to do any of it without the help of MediaFish, our young consultants, who work hard all year to plan the festival!”

“This year’s festival was another resounding success with some very impressive films being showcased to children and families. The Golden Owl Awards is a fantastic opportunity for young people to get creative, and demonstrate their filmmaking, story-telling and technological skills. I was delighted to be able to present some of the awards and to meet some extremely talented young people.”

“With Leeds being the birthplace of film, it is great that the young people of the city are able to continue that legacy by attending such an impressive event and showcasing their own filmmaking talents at the same event. Events such as the Leeds Young Film Festival and the Golden Owl Awards encourage young people to develop their skills in this exciting and growing sector”.