Leeds next generation of politicians make their mark in nationwide ballot 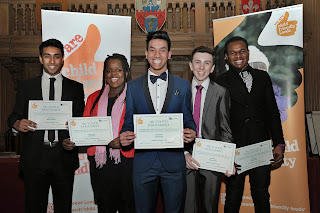 Picture caption: "The Leeds members of the UK Youth Parliament and deputies."

The young people who represent Leeds in the UK Youth Parliament are currently taking part in the annual Make Your Mark ballot, the largest consultation of young people in the country.

Leeds UK Youth Parliament members Minhaz Abedin, Shamim Miah and Nicole Sabau are taking part in the ballot which runs until 10th October, in which young people across the country are being asked what issues matter most to them. The results of the ballot will determine what is debated by the UK Youth Parliament (UKYP) in their annual House of Commons sitting on 14 November.

Voting takes places both online and through ballot papers issues in schools and youth centres and any young person in the city aged 11-18 is encouraged to cast their vote and have their say.

Ten topics will be available to choose from on the Make Your Mark ballot paper, with the five topics with the most votes going on to be discussed by MYP’s in their November debate, chaired by the Speaker of the House of Commons Rt. Hon. John Bercow MP and broadcast live on BBC Parliament.

Some of the topics that young people are being asked to choose from this year include;

• Giving young people a greater voice in their communities

• A minimum living wage of £7.65/hour for everyone

• Bringing back exam re-sits in Maths and English

Last year, over 478,000 young people took part in the ballot, making it the largest youth consultation of its kind in the UK. This year, Members of Youth Parliament have set themselves a target of getting 1,000,000 young people to take part across the UK.

11-18 year olds in Leeds have until Friday 10th October to log on and cast their vote by visiting: https://www.mi-voice.com/mym/

“Empowering children and young people to have their say about issues that affect them is one of our child friendly Leeds ambitions. We are fortunate to have three passionate members of youth parliament here in Leeds and I would like to encourage all young people in the city to follow their example and exercise their right to have a say and to take part in this year’s Make Your Mark youth ballot”

1. For interviews, photographs or comment please contact Thomas Hannan, Communications Officer at the British Youth Council, on thomas.hannan@byc.org.uk or phone 0207 250 8376

2. The UK Youth Parliament gives young people a voice on issues that matter to them.

3. The UK Youth Parliament is an initiative run by charity The British Youth Council

4. Over 600 young representatives are Members of the UK Youth Parliament. They work to ensure that the voices of young people are heard at a national, regional and local level.

5. For further details on the UK Youth Parliament please refer to http://www.ukyouthparliament.org.uk/

Leeds next generation of politicians make their mark in nationwide ballot