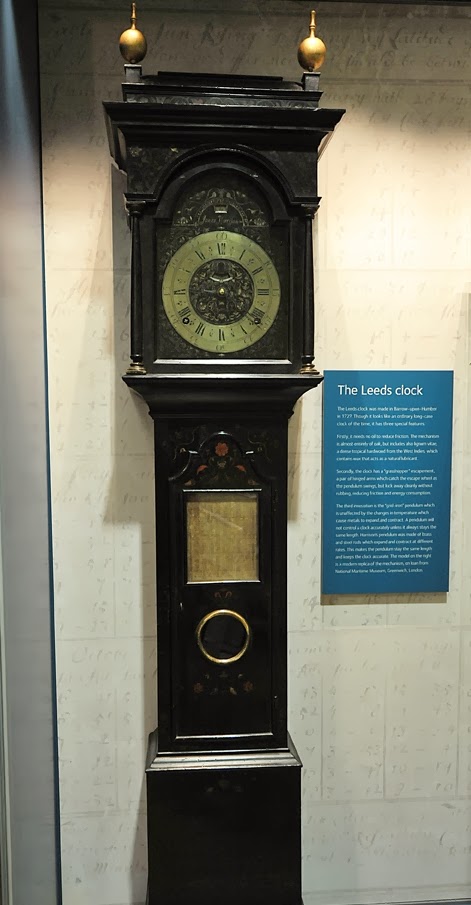 Caption: The 'John Harrison, the Clockmaker who changed the world' exhibition, is now open at Leeds City Museum.

An 18th century precision pendulum clock, which played a valuable role in helping to solve one of the greatest scientific challenges of the age, is now on permanent display at Leeds City Museum.

Built by famous clockmaker John Harrison and his brother in 1727, the longcase clock No.2, will be showcased, as part of the ‘John Harrison, the Clockmaker who changed the world’ display which will celebrate the timepiece’s contribution to accurately determining longitude at sea.

This complements the displays at the Royal Observatory, Greenwich (part of the National Maritime Museum) that are dedicated to navigation, precision timekeeping and John Harrison. It is the only display outside of London about John Harrison, and, by chance, is near to his birthplace, Foulby, Wakefield.

For many centuries the dilemma of not being able to accurately determine longitude had cost nations a fortune in lives, ships and cargoes lost. In 1714 the Longitude Act was launched by the British Government, offering a king’s ransom (£20,000) for a practical solution.

Many believed the answer lay in astronomy but Harrison knew accurate timekeeping was the key to solving the longitude problem. Taking on the challenge set by the government, Harrison produced a series of precision clocks, each one more accurate than the last.

The clock on display at Leeds City Museum is a fundamental part of Harrison’s long research, which led to his solution of a large, extremely accurate watch completed in 1759. Tested at sea this watch could withstand the motions of the ship in all sea and temperature conditions, and maintain accurate time on lengthy voyages. The most accurate timekeeper on Earth at the time exceeded the terms of the Longitude Act, and went on to eventually win the Longitude Prize.

Visitors will also have the chance to learn more about Harrison’s quest for longitude and how to this day the precise measurement of the fourth dimension - time, is used in modern navigation systems to allow us to fix points in three dimensional space.

For those who want to experience what it was like to navigate and avoid getting lost at sea, you can also enjoy the display’s ‘In Peril’ video and ‘Lost’ interactive game.

The display has been made possible through funding which has been provided by the Arts Council England, Friends of Leeds Museums, Leeds Philosophical and Literary Society, the Leeds Art Fund and the support of the National Maritime Museum.

"Accurately determining longitude at sea was a question that baffled scientists and experts for many centuries, and this new exhibition at Leeds City Museum will enable visitors to see one of John Harrison’s precision pendulum clocks, that played a valuable role in helping to solve the problem.

"This is a fantastic opportunity to learn more about Harrison’s work and his quest to find an answer to one of the greatest scientific challenges, and also to find out if you have what it takes through an interactive game, to navigate and avoid getting lost at sea."

The Longitude Act was effectively the first government sponsored research and development project. The Board of Longitude was therefore of immense importance in guiding and investing into research to solve the Longitude Problem.

The ‘John Harrison, the Clockmaker who changed the world’ display is located on the ground floor of the Leeds City Museum next to the Brodrick Hall and World View Gallery.