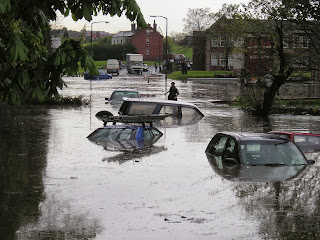 Caption: An image of the impact of flooding in Millshaw in south Leeds in 2005

Leeds City Council is calling on residents to have their say on how best to manage the risk of flooding across the city.

As part of the Leeds Flood Risk Management Strategy, a public consultation exercise is now underway which will guide policies and activities carried out by Leeds City Council, the Environment Agency, Yorkshire Water Services, the Canal & River Trust and the Highways Agency over the next six years.

The consultation takes the form of an online questionnaire which can be seen at www.leeds.gov.uk/floodrisk and will run until the end of October. It can also be completed at all one-stop centres and council-managed libraries in the city.

While acknowledging the major flood alleviation scheme which is proposed to reduce the chances of the River Aire causing a severe flood of the city centre, the scope of the strategy focuses instead on local flooding issues which originate from smaller watercourses, surface water, sewers due to excessive rainfall and groundwater.

The strategy is a national requirement and will provide an update to the preliminary assessment carried out in September 2011. It will be formally reviewed every six years with the next review due by April 2018.

“As part of the strategy for Leeds on trying to protect against the risk of flooding, it is really important that as many people as possible take part in the consultation and let us know their thoughts.

“We need to get this right as it will not be up for review again until 2018 so I would encourage people from all over the city to get involved.”

To take part in the public consultation go to www.leeds.gov.uk/floodrisk