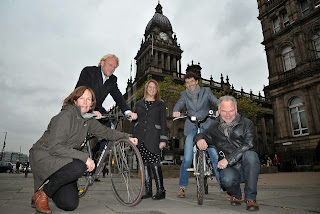 A delegation of special guests from the Netherlands visited Leeds this week to see how the city is preparing to host the start of next year’s Tour de France.

Representatives of the city of Utrecht were in Leeds on Monday on a fact-finding visit as they begin their own preparations for the world’s largest annual sporting event having been chosen to host the Grand Départ of the following year’s race in 2015.

Led by project director Martijn van Hulsteijn, the delegation visited Civic Hall where they met and heard from representatives of the team delivering the 2014 Grand Départ – Leeds City Council, TdFHUB2014Ltd and Welcome to Yorkshire.

The group were given an insight into how the plans have developed around the Leeds start, which will take place from The Headrow in the city centre on Saturday 5 July 2014. They also discussed the business opportunities and economic benefits offered by the Tour de France, plus elements around marketing, profile-raising and communications.


While in Leeds, the delegation took in a guided walking tour of some of the city centre locations to be used to host the Tour next summer. They also heard about the work being carried out to secure a long-term legacy of the event by City of York Council, the authority leading on legacy for the Yorkshire region, and the West Yorkshire Passenger Transport Executive (Metro).

“We are very grateful to Leeds for inviting us to come and talk to them about hosting the Grand Départ of the Tour de France, and it was a very enjoyable and valuable visit as we could discuss what they are doing and to find out how their plans have developed.

“We are thrilled to be following Leeds as the next host city of the start of the Tour de France. Like Leeds Utrecht has a real passion for cycling and we are honoured to have been chosen to start the 2015 Tour. We will be watching the 2014 start in Leeds with great interest and excitement as we get ready for our own Grand Départ a year later.”

“We were delighted to meet the delegation from Utrecht and compare notes and ideas about hosting the Grand Départ of the Tour de France. The challenge it presents as a city is immense, but we know the hard work will all be worth it when the world turns its attention on Leeds and the Yorkshire region next July.

“The plans are now coming together as we prepare to enter the final few months before the largest annual sporting event in the world comes to Leeds, which is sure to be an amazing few days not to be missed.”

“I am sure the team from Utrecht will be feeling the same buzz and excitement that we had when we found out we had won our collective bid to host the Grand Départ in Yorkshire. The time flies and I hope they enjoy the journey as much as we have and continue to do so.”

Leeds City Council is the lead local authority for the Grand Départ of the 2014 Tour de France, liaising with other authorities and stakeholders on the route and in the Yorkshire region.

TdFHUB2014Ltd is the not-for-profit company set up by UK Sport to co-ordinate planning across the three stages of the Tour de France taking place in England in 2014, working with local authorities, Welcome to Yorkshire and other partners. It is headed by Sir Rodney Walker, the former chair of UK Sport.

Welcome to Yorkshire is the county’s official tourism agency and led the successful bid to bring the Grand Départ to Yorkshire.