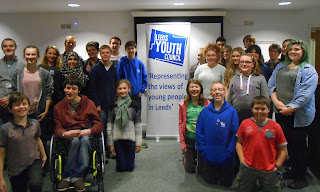 The members of the Leeds Youth Council have been recognised for their campaign work with a prestigious Diana Award.

The youth council, which is made up of young people aged 11 to 19 years old from across the city, received the Diana Award in recognition of the time and dedication they have shown to actively campaign on issues that are important to the young people of Leeds.

The Diana Award is a legacy to Princess Diana’s belief that young people have the power to change the world for the better. Since 1999, the Diana Award has recognised over 42,000 young people who have made a positive difference to the lives of others and their communities. The aim of the Diana Award is to recognise young people for their contribution to society, empower them to reach their full potential and encourage them to engage in social action as early as possible.

The Leeds Youth Council received the award for being a Diana Active Campaigner in the local community. Over the last two years the group have volunteered over 1500 hours of their time to actively campaign on issues that are important to the young people of Leeds.

“This is a fantastic achievement for the members of the Leeds Youth Council, and great recognition of the work they do representing the young people of our city. I’m sure this award will encourage them to continue their hard work and encourage others to stand up for their beliefs.”

In receiving the award the member of the Leeds Youth Council are able to join the Diana Network, a programme opening doors to work experience, volunteering and campaigning whilst training young people in employability and social action skills.

“The Diana Award is proud to recognise young campaigners, like the Leeds Youth Council who have the confidence and courage to stand up for what they believe. The Diana Active Campaigner Award is presented to inspirational young people who have made a positive difference in the communities. With a growing network of over 42,000 Award Holders, we are building a force of young people who are committed to take social action and improve our communities.”

The Training and Mentoring Programme gives Award Holders who have achieved something remarkable themselves to become Youth Mentors to disadvantaged young people.

For more information on the Diana Award or to make a nomination please visit – www.diana-award.org.uk