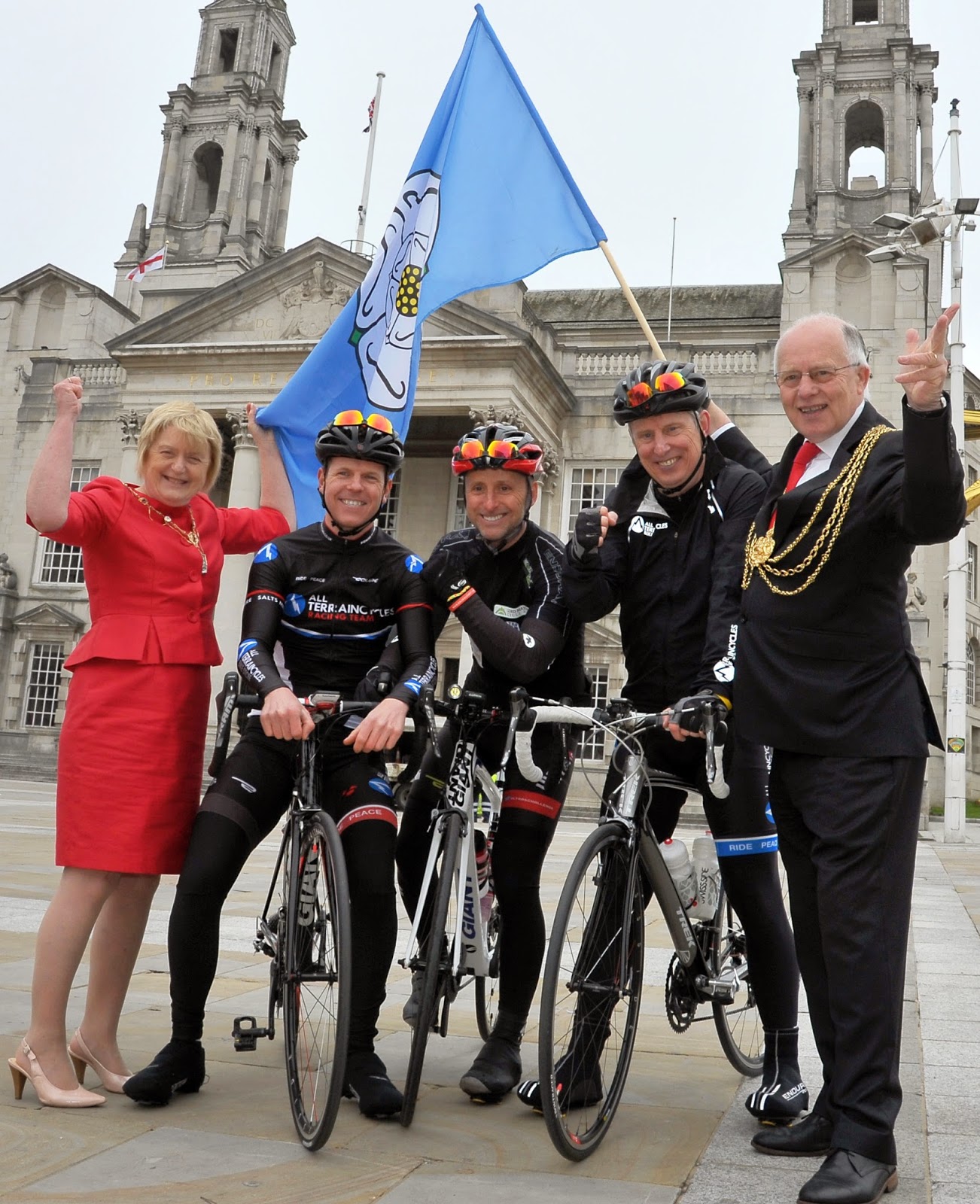 Caption: Riders Ben Wood, Andy North and Iain Harris with the Lady Mayoress Edna Murray and the Lord Mayor of Leeds Cllr Thomas Murray, before starting their journey to Dortmund.

Members of a cycling team have hit the road to Dortmund as part of an attempt to set a new record in aid of the Lord Mayor’s charity appeal and the Soldier’s Charity.

Leaving Millennium Square with a civic send off from the Lord Mayor of Leeds Councillor Thomas Murray and the Lady Mayoress Edna Murray, three riders of the Ultra6 team, Andy North, Ben Wood and Iain Harris are aiming to cycle a distance of approximately 250 miles to reach Dortmund in a target time, excluding the ferry journey from Hull to Rotterdam, of under 20 hours. On their arrival in the German city which is twinned with Leeds, they will then pass a special message of welcome from the Lord Mayor of Leeds to his Dortmund counterpart.

The Ultra6 team will meet up with three riders in Dortmund from Leeds Trinity University and local businessman David Gale before cycling through Germany, Belgium, France, Lille, and arriving back on English soil in Hull on Sunday May 4. There they will be met by other cyclists, who in aid of the Lord Mayor’s 2014 Charity Cycle Ride, will be making the trip from Hull to Leeds, which will finish at approximately 3pm with a celebration of their efforts as part of a family fun day from 12 noon to 4pm at Temple Newsam Park.

Places are still available for cyclists to join the ride from Hull to Leeds. To find out more, please contact Pennine Events on: (01772) 447 979 or via email: support@pennineevents.co.uk

"We feel extremely honoured that Andy, Ben and Iain from the Ultra6 team, have decided to take on such a massive challenge of a cycle ride to Dortmund and back to Leeds in order to raise funds for our LOFFTY Charity appeal and the Soldier’s Charity.

"As part of their ride, they are aiming to set a new record by reaching Dortmund in an extremely testing time of under 20 hours, and we certainly wish them all the best in their attempt which will provide a tough target for other cyclists to try and beat and in the future.

"We are looking forward to welcoming them back to Hull as they join other riders making the trip back to Leeds as part of the Lord Mayor’s Charity Cycle Ride, where they can be guaranteed a great ovation for their efforts at our family fun day at Temple Newsam Park."

"We have taken on quite a few challenges at Ultra6 over the years, but our attempt to reach Dortmund in a time of below 20 hours and set a new record is certainly one of the biggest!

"It is though in aid of two fantastic causes, and we are really looking forward to joining other riders taking part in the Lord Mayor’s Charity Bike Ride at Hull before making the return to Leeds on Sunday May 4."

The key aim of the LOFFTY project, which stands for ‘Leeds Offers Fun For The Young’, is to raise funds that will provide additional fun activities for kids in the city during and after school, at weekends and throughout the school holidays.

ABF The Soldiers’ Charity is the British Army’s national charity. Since 1944, it has been helping soldiers, veterans and families who are in need It helped more than 6,000 individuals last year with specialist wheelchairs, respite holidays, care home fees and grants to specialist military charities. For more information please see: www.soldierscharity.org