Council to continue funding community police officers in the city 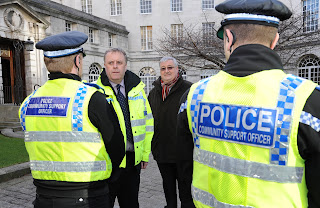 Council chiefs have agreed to continue to fund Police Community Support Officers (PCSOs) for a further three years as part of a drive to keep communities safe.

At a meeting of the council’s executive board on Wednesday 13 March 2013 members agreed to invest around £1.5million each year until March 2016, subject to council budgets allowing this.

Leeds has benefited from the work of PCSOs for a number of years. There are currently 310 PCSOs working across the city – 165 of these posts are part funded through council budgets.

Over the past year more emphasis has been put on PCSOs developing joint working with a number of other services across the city. This has already seen officers work with the out of hours noise nuisance team to deal with noise and anti-social behaviour hotspots, contribution to environmental enforcement action and better sharing of intelligence.

“Police Community Support Officers play an important role in our city in keeping our communities safe and provide a highly visible policing presence that reassures the public.

“Despite the budget pressures that the council currently faces we have continued to fund the roles and will continue to do so into the future.

“There has already been an increase in successful joint working between PCSOs and other services and we want this to become even more developed over the next few years.”


“The Police Community Support Officers which the council is matching the investment by the Police to fund play a vital part in keeping people safe, and feeling safe. When out and about in Leeds, like in Beeston where I was with Inspector Ackerman and his Neighbourhood Police Team a few days ago, I heard first hand how much people really value those they see and speak to in their neighbourhoods every day. Without these vital PCSOs we wouldn’t be able to keep the people on the beat local residents know and trust.”

“Despite the huge cuts to funding for the Police, £100 million cut resulting in 2000 jobs to be lost, and the cuts to the council from government, the fact these PCSOs has been protected shows the commitment of the council and will make a difference on the streets for people right across Leeds, who like me want the Police working together with communities and the key people locally to keep the streets safe.”

The role of a PCSO is to contribute to the policing of neighbourhoods, primarily through visible patrols with the purpose of reassuring the public. They tackle anti-social behaviour in public places, and respond to concerns raised by residents and elected members.

Council to continue funding community police officers in the city