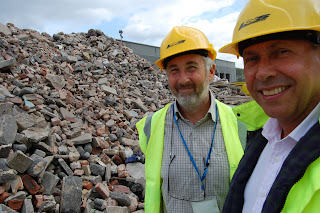 Leeds City Council is committing to a national scheme to cut down the amount of construction waste sent to landfill sites.

The flagship £80m Leeds Arena will be one of the first projects to be built under the initiative. Construction work will begin later this year and the preferred construction contractor, BAM UK has committed to the 2012 Construction Commitment initiative.

Councillor Richard Lewis, Leeds City Council executive member responsible for city development, said:
“Signing the WRAP agreement is a real practical step which shows that Leeds City Council is serious about protecting the environment. I look forward to working together with our contractors to cut costs and reduce our carbon footprint, benefiting Leeds residents now and in the future.”

Councillor Tom Murray, Leeds City Council executive board member for environmental services, said:
“By thinking differently about how we dispose of construction waste and reusing and recycling more we will not only reduce Leeds’ CO2 emissions but also make a contribution to help meet the national target.”

Between 80% to 90% of all construction waste can be recycled. Soil can be used for top soil in gardens or garden centres, wood is re-chipped and re-used, rubble is crushed in hardcore and used for road building, plastics are washed, chipped an re-used and cardboard repulped.

Steve Tilson, general manager for Leeds Skip Services said:
“Out of the 4,500 tonnes of construction waste we receive every week, up to 90% will be recycled and only a very small amount will go to landfill. We are constantly looking at our process and sorting methods together with new technology to improve our recycling ratios even further as we strive towards zero landfill. “

Notes to Editors
• In 2007-08 Leeds produced over two million tonnes of waste 536,000 tonnes of which came from construction alone three times more than the total amount of domestic waste and the majority going to landfill sites within Leeds.
• Landfill charges are currently at £48 per tonne rising to £80 per tonne in 2014 but the figures can be much higher once you add on disposal costs, labour and skip hire.
• The 2012 Construction Commitment, Halving Waste to Landfill was established by WRAP, the government backed Waste and Resources Action Programme which works to reduce the amount of waste which goes to landfill.
• WRAP is a not-for-profit company backed by government funding from England, Scotland, Wales and Northern Ireland.
• Over 436 organisations, including The University of Leeds, Manchester City Council, Asda and Sainsbury’s, have already signed up to the 2012 Halving Waste to Landfill initiative.