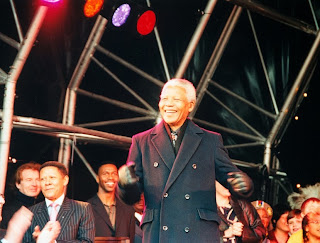 Caption: Nelson Mandela pictured at the opening of Millennium Square in Leeds in 2001

The people of Leeds will be invited to celebrate the life of Nelson Mandela during a special service at Leeds Minster this week.

The commemorative service will take place at the Minster on Thursday (December 12) at 6pm and follows Mandela’s death last week.

It will be conducted by the Rt. Revd. John Packer, Bishop of Ripon and Leeds, and Canon Tony Bundock, Rector of Leeds.

The tribute will feature music from the Minster Choir, the Free Range Choir, the Gledhow Choir of African Song, Garforth Academy with the Mzuvele School Choir, and St Peter's School in Lincoln Green.

The event has been organised by Leeds Minster alongside the council and Leeds Churches Together in Mission.

"This is an opportunity for the city to celebrate the immense contribution Nelson Mandela made over the years to justice, to freedom, to showing forgiveness and to a sense throughout the world of equality and humanity.

“This is a time of mourning but also of celebration, and this service can be a celebration of his life and a reminder that there still is the pursuit of justice within our world."

Although the service will be conducted in the Christian tradition, the commemoration is to include contributions from other faiths represented in the city.

“The worldwide outpouring of grief following the death of Nelson Mandela is a true testament to the impact this exceptional man had on people across the globe.

“Here in Leeds, residents around the city have paid tribute to him in their own ways, be that signing books of condolence, laying flowers at Mandela Gardens or writing poems.

“This church service is now an opportunity for people of any faith to gather together and celebrate the life and legacy of Nelson Mandela and show just how much he was loved and respected in our city.”

As part of the visit, the former South African president and anti-apartheid campaigner received the Freedom of the City of Leeds.

The Nobel Peace Prize winner died at his home in Houghton, Johannesburg on December 5 at the age of 95.

Books of Condolence have been opened in the Lady Chapel at the Minster, The Mandela Centre and Reginald Centre on Chapeltown Road and Leeds Civic Hall for members of the public to sign.

- For more information or to arrange pictures and filming, please contact: