By George, Barney’s Le Tour countdown clock design has got it! 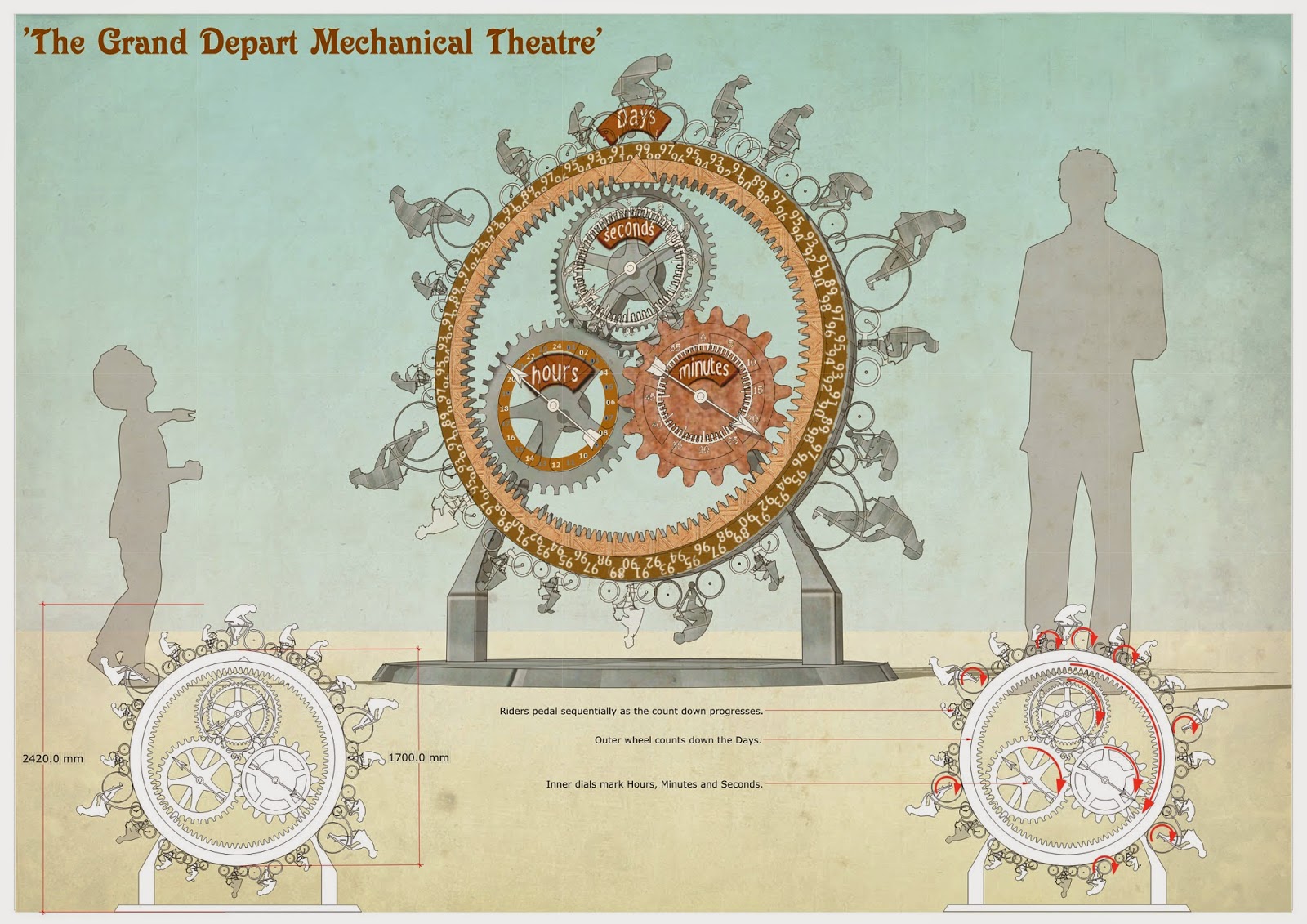 Details of the unique clock design which will help Leeds count down to hosting the start of this year’s Tour de France have been revealed today.

The stylish and striking clock entitled ‘The Grand Départ Mechanical Theatre’ designed by local theatre designer Barney George was chosen by Leeds City Council as the choice to be the public countdown clock to Saturday 5 July, when the city will host the Grand Départ of the world’s largest annual sporting event.

Chosen from a host of entries submitted for the clock, the winning submission is now being turned into reality by students from the University of Leeds School of Mechanical Engineering before going on public display in the Trinity Leeds shopping complex.

The chosen design is a celebration of cycling directly inspired by the mechanics of a bicycle itself, featuring a giant steel cog with a range of moving miniature cyclists of all kinds from penny farthings to modern race bikes on its outside.

With the outer cog counting down days, at the same time three inner dials will be counting down hours, minutes and seconds. As the days progress more of the miniature riders are activated before they are all in motion together. As the countdown reaches zero, the finale will feature a series of chimes and confetti cannons to signal that the time of the Grand Départ has arrived.

“I'm thrilled to be part of the celebration of this world-renowned event."


The original plan was to have the clock in place in time to coincide with 100 days to go to the Grand Départ tomorrow, but such is the intricacy of the design and the level of precision required of the metal and woodwork detailing it will now be unveiled later in May.

“The creative community of Leeds did us proud as we had lots of amazing entries submitted which is a testament to the talent and creativity levels found in the city. Barney’s fantastic design caught the eye immediately as it looks amazing and is sure to be a real headturner for people to admire as they walk past in Trinity Leeds.

“We look forward to seeing the finished clock produced by Barney and the students at the University of Leeds soon as we continue to get ready to welcome the world to the start of the Tour de France here in Leeds.”

“We’re really proud to be hosting Barney’s winning design at Trinity Leeds so that millions of shoppers and passers-by will be able to see and enjoy it in action. This will be a momentous year for the city and one which is unlikely to ever happen again.”

“The clock is a fantastic piece of design which will pose some technical challenges for the students at the university. Mechanical engineers and product designers from the Faculty of Engineering will be tasked with designing, programming and building a light-based countdown which will run through to race day.

“Using our 3D Computer Aided Design and 3D printing facilities we will also be designing and building a number of mechanical cycling ‘automata’ which will cycle at various times through the day. It is going to look amazing!”

For the latest information on Yorkshire’s Grand Départ visit www.letouryorkshire.com


Notes to editors:
The 2014 Tour de France begins in Leeds on Saturday 5 July, with stage one taking the riders 190kilometres to Harrogate.

Stage two on Sunday 6 July is 200km from York to Sheffield, while stage three on Monday 7 July is 159km from Cambridge to London.

It is estimated that 98 per cent of the population of Yorkshire will be within an hour of the route during its two days in the county, with the economic benefit expected to be in excess of £100m.

The University of Leeds is producing a programme of activities to celebrate the Grand Départ, including free public lectures. More information can be found on their website at www.sport.leeds.ac.uk/landing.asp?section=584&sectionTitle=Tour+de+France

By George, Barney’s Le Tour countdown clock design has got it!