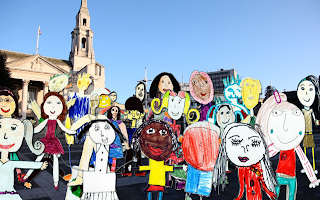 Children and young people from Leeds have created an inspirational film that will be shown across the city this month, which aims to get people thinking about what it is like to grow up in Leeds today and increase support for the work to become a child friendly city.

The film, a stop-motion animated film, created by children and young people from across the city with help from Studio 12, as part of Leeds City Council’s Child Friendly Leeds campaign, is being shown at high profile locations this month.

People visiting the city centre can see clips from the film, called “Child Friendly Leeds – play your part” on the ‘big screen’ in Millennium Square, as well as on screens around the first direct arena and at Trinity Leeds shopping centre. People attending the Leeds Young People’s Film Festival and last week’s Golden Owl awards were also able to view the youngsters’ work.

The film, which was sponsored by British Gas as part of their Child Friendly Leeds pledge and sponsorship of the child friendly Leeds awards, was created through workshops in which the young people worked with local young poet, Ma Maposa.

A variety of schools and community groups were involved in the workshops, writing the poem and creating the artwork, including pupils from Blenheim Primary school and Chapel Allerton Improvised Family Theatre.

The film is accompanied by a poem written by the young people with the help from Ma Maposa, which includes the young people’s hopes, dreams and ambitions, as well as their thoughts on school, transport, health and sport. The poem also considers equality and children in need, as well as a call out to businesses and other organisations to consider how they can support more children achieve their ambitions. One line from the poem which sums up the council’s Child Friendly Leeds ethos is “This is my home. My future depends on it”.

“This is a powerful film which showcases the young people’s creativity and ideas about how to make Leeds a better place.

“As many of our 2,300 people employed have young families, that’s why we were pleased to support Child Friendly Leeds and this film. I hope the stories of these young people will help with the campaign to make Leeds a safer place to grow up in.”

Some of the children and young people who took part said what they enjoyed most about making the film:

“When everyone got to have a go and it was really cool because I’ve never made a film in my life! I like the animations.”

“Everybody got a part to say.”

“When we did the pictures and they came to life.”

The “Child Friendly Leeds – play your part” film can be seen here.

To find out more about child friendly Leeds people can visit: www.leeds.gov.uk/childfriendlyleeds